The Boston Raphael: A Mysterious Painting, an Embattled Mueseum in an Era of Change & a Daughter's Search for the Truth 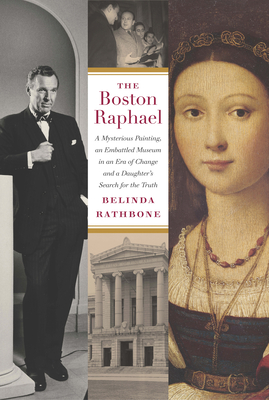 The Boston Raphael: A Mysterious Painting, an Embattled Mueseum in an Era of Change & a Daughter's Search for the Truth

By  Belinda Rathbone
$ 29.95
Out of Stock In Store (Available to Order)

The full, inside story of how the discovery of a previously unknown painting by Raphael, the Italian Renaissance master, went from media sensation to career-destroying scandal. On the eve of its centennial celebrations in December, 1969, the Boston Museum of Fine Arts announced the acquisition of an unknown and uncatalogued painting attributed to Raphael. Boston's coup made headlines around the world. Soon afterward, an Italian art sleuth began investigating the details of the painting's export from Italy, challenged the museum's right to ownership. Simultaneously, experts on both sides of the Atlantic lined up to debate its very authenticity. While these contests played themselves out on the international stage, the crisis deepened within the museum as its charismatic director, Perry T. Rathbone, faced the most challenging crossroads of his thirty-year career. The story of the forces that converged on the museum, and how they led to Rathbone's resignation as director, is only now fully revealed in this compelling, behind-the-scenes story that reveals how the art world, media, and museums work.