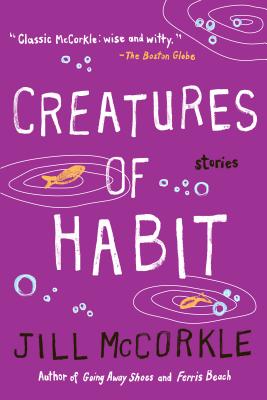 By  Jill McCorkle
Paperback
$ 13.95
Order Online (Out of Stock In Store)
Jill McCorkle's new collection of twelve short stories is peopled with characters brilliantly like us-flawed, clueless, endearing. These stories are also animaled with all manner of mammal, bird, fish, reptile-also flawed and endearing. She asks, what don't humans share with the so-called lesser species? Looking for the answer, she takes us back to her fictional home town of Fulton, North Carolina, to meet a broad range of characters facing up to the double-edged sword life offers hominids. The insight with which McCorkle tells their stories crackles with wit, but also with a deeper-and more forgiving-wisdom than ever before. In Billy Goats, Fulton's herd of seventh graders cruises the summer nights, peeking into parked cars, maddening the town madman. In Monkeys, a widow holds her husband's beloved spider monkey close along with his deepest secrets. In Dogs, a single mother who works for a veterinarian compares him-unfavorably-with his patients. In Snakes, a seasoned wife sees what might have been a snake in the grass and decides to step over it. And, in the exquisite final story, Fish, a grieving daughter remembers her father's empathy for the ugliest of all fishes. The success behind Jill McCorkle's short stories-and her novels-is, as one reviewer noted, her skill as an archaeologist of the absurd, an expert at excavating and examining the comedy of daily life (Richmond Times-Dispatch). Yes, and also the tragedy.

Jill McCorkle’s first two novels were released simultaneously when she was just out of college, and the New York Times called her “a born novelist.” Since then, she has published six novels and four collections of short stories, and her work has appeared in Best American Short Stories several times, as well as The Norton Anthology of Short Fiction. Five of her books have been New York Times Notable books, and her most recent novel, Life After Life, was a New York Times bestseller. She has received the New England Booksellers Award, the John Dos Passos Prize for Excellence in Literature, and the North Carolina Award for Literature. She has written for the New York Times Book Review, the Washington Post, the Boston Globe, Garden and Gun, the Atlantic, and other publications. She was a Briggs-Copeland Lecturer in Fiction at Harvard, where she also chaired the department of creative writing. She is currently a faculty member of the Bennington College Writing Seminars and is affiliated with the MFA program at North Carolina State University.