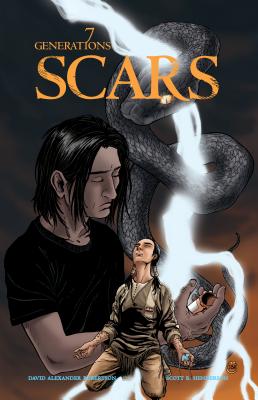 By  David A. Robertson , Illustrated By  Scott B. Henderson
$ 13.95
Unavailable

Scars introduce White Cloud, a young Plains Cree boy, in the year 1870, when the last great smallpox epidemic swept through the prairies. After witnessing, one by one, the death of his entire family from the illness, he summons the strength to journey on to find a new home and deliver himself from the terrible disease. But will he make it?

Scars follows White Cloud and the people he encounters, as he struggles to survive against impossible odds. By learning about the bravery and perseverance of his ancestor White Cloud, Edwin summons his own courage and travels to confront the main source of his despair: the father he barely knows.

David A. Robertson is an award-winning writer. His books include When We Were Alone (winner Governor General's Literary Award), Will I See? (winner Manuela Dias Book Design and Illustration Award Graphic Novel Category), Betty, The Helen Betty Osborne Story (listed In The Margins), and the YA novel Strangers. David educates as well as entertains through his writings about Indigenous Peoples in Canada, reflecting their cultures, histories, communities, as well as illuminating many contemporary issues. David is a member of Norway House Cree Nation. He lives in Winnipeg. Scott Henderson has worked as an illustrator for comics, portraiture, and advertising art. He is author/illustrator of the sci-fi/fantasy comic, The Chronicles of Era and has illustrated two comics for the Canadian Air Force's For Valour series, the bestselling graphic novel series 7 Generations, selected titles from the Tales From Big Spirit series, and the graphic novels, Betty: The Helen Betty Osborne Story and Eisner-award nominee, A Blanket of Butterflies.