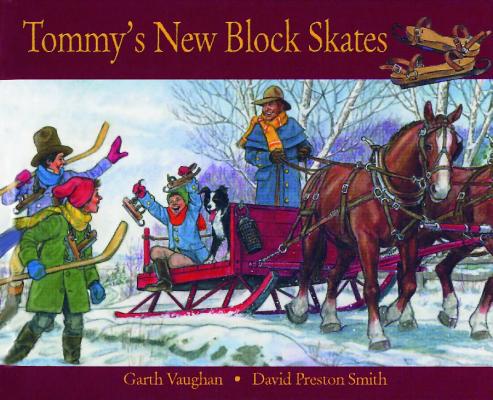 It is the late 1800s, and young Tommy is dreaming of a new pair of block skates. In winter, he watches while his friends and siblings play and skate on the frozen pond. This being the age of bartering, Tommy's father strikes a deal with the blacksmith: new fence posts in exchange for a pair of block skates. With attention to historical accuracy and detail, David Preston Smith's beautiful illustrations take readers step-by-step through the process of how these old-fashioned skates are made.

A retired surgeon, Garth Vaughan is curator of the Windsor Hockey Heritage Museum and the author of the Canadian bestseller The Puck Starts Here: The Origin of Hockey (1996). Garth is a strong promoter of Nova Scotia's hockey heritage, and his hockey history website, www.birthplaceofhockey.com, is popular with children and adults worldwide. Garth lives in Windsor, Nova Scotia._David Preston Smith is an internationally recognized artist and illustrator. He launched his career with NASA as a concept illustrator and has worked as the official sports artist for many of Canada's premier sporting events, including the Canada Cup Hockey Series and Olympic Games. He lives in Head of St. Margaret's Bay, Nova Scotia.