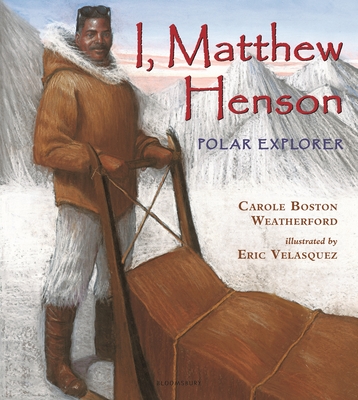 By  Carole Boston Weatherford , Illustrated By  Eric Velasquez
Paperback
$ 9.99
Pre-Order (Not Yet Published)

The inspiring story of the Black explorer who made the first successful expedition to the North Pole.

Matthew Henson was not meant to lead an ordinary life-his dreams had sails. Those dreams took him from the port of Baltimore and onto the sea, seeking adventures around the world. He may have started out as a cabin boy on the ship of Robert Peary, but he would quickly prove himself as an explorer. And after decades of determination in the face of danger, Henson was part of a crew-one white man, one Black man, and four Inuit men-who finally did what no one had ever done before: they made it to the North Pole.

Told in poetic first-person narration by award-winning author Carole Boston Weatherford with art from award-winning illustrator Eric Velasquez, I, Matthew Henson is the thrilling and inspiring story of a hidden figure from American history.

Carole Boston Weatherford is the award-winning author of more than 50 books of poetry, nonfiction, and children's literature. She resides in North Carolina where she teaches at Fayetteville State University. She is the author of three Caldecott Honor Books, including Freedom in Congo Square.
cbweatherford.com

ERIC VELASQUEZ is the author and illustrator of Grandma's Records and Grandma's Gift, a Pura Belpré Award winner. He is also the illustrator of The Price of Freedom; I, Matthew Henson, which received four starred reviews; Jesse Owens: Fastest Man Alive, which received two starred reviews; and The Piano Man, for which he won the Coretta Scott King/John Steptoe New Talent Award. He is a graduate of the School of Visual Arts and lives in New York. www.ericvelasquez.com