On That Day: The Definitive Timeline of 9/11 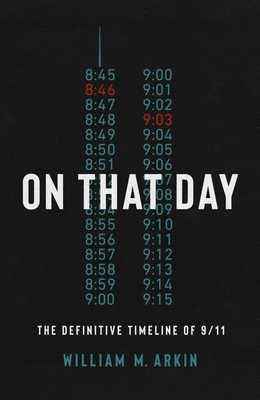 On That Day: The Definitive Timeline of 9/11

“A maddening, essential study in misinformation, jingoism, bad intelligence, and other hallmarks of the recent American past.”—Kirkus (starred review)

Anyone who experienced the attacks on September 11 cannot forget the imagery: the smoking, falling towers, the Pentagon smoldering, the Shanksville crash site, the first responders.

But there is an invisible story hidden in the wreckage, one that required years of patient investigation and the piecing together of a sequence from many scattered sources. By establishing the most definitive timeline of how that day unfolded, William M. Arkin shows how the US government failed in the face of the unprecedented attack. It is a story of laughable airport security, vulnerable airspace, blind intelligence, poor communications, muddled orders, Pentagon chaos, and presidential isolation. Everything about the emergency procedures of the governments—from White House security to continuity of government to military alerts—went wrong.

On That Day is a stunning, nightmare journey through a government reeling in confusion while many civilians performed individual acts of heroism. It is a chilling exposé of government negligence and overreach, and a constitution in crisis.

William M. Arkin is an American political commentator, best-selling author, journalist, activist, blogger, and former United States Army soldier. He has previously served as a military affairs analyst for the Los Angeles Times, The Washington Post, and The New York Times. He is the author of several works of non-fiction including  Code Names: Deciphering U.S. Military Plans, Programs and Operations in the 9/11 World and American Coup: How a Terrified Government Is Destroying the Constitution.