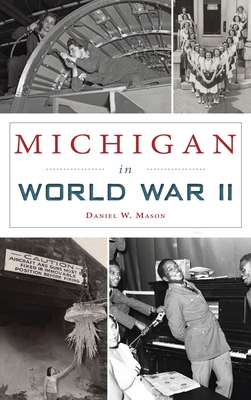 Detroit's role as the Arsenal of Democracy during World War II is well known, but the war effort in Michigan extended to all corners of the state. Schoolchildren showed their patriotism by raising money for war bonds to buy planes, tanks and jeeps. The locks in Sault Ste. Marie were considered a potential target of a German attack and were guarded accordingly. A spy ring in Detroit mobilized an unsuccessful attempt to help an escaped German POW flee the continent. A top-secret navy project, undisclosed until the 1990s, set aircraft carriers afloat on the Great Lakes. Compiling more than 180 images, including many never before seen, author Dan Mason unfolds the stories of Michigander grit and courage overseas and at home.