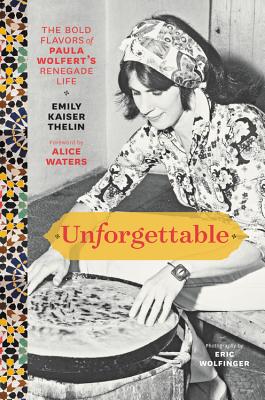 This biographical cookbook tells the story of culinary legend and author of nine award-winning cookbooks, Paula Wolfert, who was diagnosed with Alzheimer's in 2013, and shares more than fifty of her most iconic dishes as it explores the relationship between food and memory.

The gripping narrative traces the arc of Wolfert's career, from her Brooklyn childhood to her adventures in the farthest corners of the Mediterranean: from nights spent with Beat Generation icons like Allen Ginsberg, to working with the great James Beard; from living in Morocco at a time when it really was like a fourteenth century culture, to bringing international food to America's kitchens through magazines and cookbooks.

Anecdotes and adventuresome stories come from Paula's extensive personal archive, interviews with Paula herself, and dozens of interviews with food writers and chefs whom she influenced and influenced her-including Alice Waters,Thomas Keller, Diana Kennedy, André Daguin, and Jacques Pepin.
Wolfert's recipes are like no other: each is a new discovery, yielding incredible flavors, using unusual techniques and ingredients, often with an incredible backstory. And the recipes are organized into menus inspired by Wolfert's life and travels--such as James Beard's Easy Entertaining menu; a Moroccan Party; and a Slow and Easy Feast.

Unforgettable also addresses Wolfert's acknowledgement of the challenges of living with Alzheimer's, a disease that often means she cannot remember the things she did yesterday, but can still recall in detail what she has cooked over the years. Not accepting defeat easily, Wolfert created a new brain-centric diet, emphasizing healthy meats and fresh vegetables, and her recipes are included here.

Unforgettable is a delight for those who know and love Paula Wolfert's recipes, but will be a delicious discovery for those who love food, but have not yet heard of this influential cookbook writer and culinary legend.

Emily Kaiser Thelin is a writer, editor, and former restaurant cook. A IACP Award-winner, two-time James Beard Award finalist, and a former editor at Food & Wine, her work has also appeared in Oprah, Dwell, the New York Times, the Wall Street Journal, and the Washington Post. For five years during and after college Emily worked as a professional chef: as a prep cook in London, a private chef in France, and a line cook in Washington, DC.