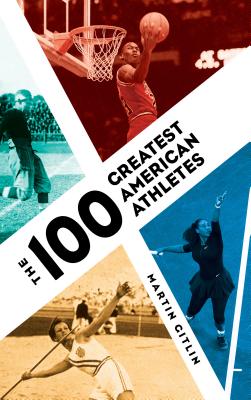 From Babe Ruth to Michael Phelps, Billie Jean King to Tony Hawk, American athletes have been a source of pride and accomplishment throughout the nation's history. While there have been plenty of athlete biographies, sports profiles, and behind-the scenes looks at various professional sports, no book has attempted to rank the greatest American athletes of all time. Until now. In The 100 Greatest American Athletes, Martin Gitlin ranks the best of the best using a point system to assess each individual's achievements, versatility, and athleticism, as well as the physical requirements of the sport or sports in which they participated. The final tally of these points provides the ranking for each athlete in the book, which is sure to spark lively conversation. Some of the most iconic names in sports history can be found here, including Muhammad Ali, Jim Brown, Larry Byrd, LeBron James, Mickey Mantle, Joe Montana, Jesse Owens, Mark Spitz, Tiger Woods, and Babe Didrikson Zaharias. It can be difficult to compare bobsledders to boxers, figure-skaters to football players, shot-putters to skiers. This book, however, attempts to do just that in an accurate, fair manner that honors those who made valuable contributions to American sports and culture. Sports fans will undoubtedly enjoy debating the ranking of these remarkable individuals, making The 100 Greatest American Athletes a must read.

Martin Gitlin is a freelance writer and the author of more than 100 books on popular culture and sports. He has won many awards for his writing, including first place for General Excellence in Journalism from the Associated Press. His most recent books include The Greatest Sitcoms of All Time (2013), The Greatest College Football Rivalries of All Time (2014), and Powerful Moments in Sports: The Most Significant Sporting Events in American History (2017).