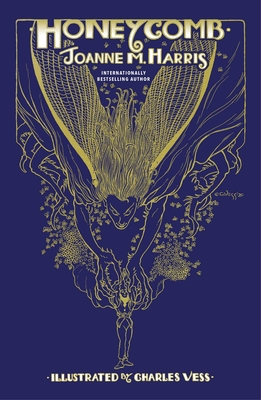 A lushly illustrated set of dark, captivating fairy tales from the bestselling author of The Gospel of Loki with illustrator Charles Vess (Stardust).

The beauty of stories; you never know where they will take you. Full of dreams and nightmares, Honeycomb is an entrancing mosaic novel of original fairy tales from bestselling author Joanne M. Harris and legendary artist Charles Vess in a collaboration that’s been years in the making. The toymaker who wants to create the perfect wife; the princess whose heart is won by words, not actions; the tiny dog whose confidence far outweighs his size; and the sinister Lacewing King who rules over the Silken Folk. These are just a few of the weird and wonderful creatures who populate Joanne Harris’s first collection of fairy tales.

Dark, gripping, and brilliantly imaginative, these magical tales will soon have you in their thrall in a uniquely illustrative edition.

The tales are beautifully illustrated by renowned illustrator Charles Vess (Stardust, Sandman, The Books of Earthsea).

Joanne Harris is an Anglo-French author, whose books include fourteen novels, two cookbooks, and many short stories. Her work is extremely diverse, covering aspects of magical realism, suspense, historical fiction, mythology, and fantasy. In 2000, her 1999 novel Chocolat was adapted to the screen, starring Juliette Binoche and Johnny Depp. She is an honorary Fellow of St. Catharine’s College, Cambridge, and in 2013 was awarded an MBE by the Queen. Her hobbies are listed in Who’s Who as “mooching, lounging, strutting, strumming, priest-baiting, and quiet subversion.” She also spends too much time on Twitter, plays flute and bass guitar in a band first formed when she was sixteen, and works from a shed in her garden at her home in Yorkshire.

Charles Vess is an artist and comic book illustrator. Vess is known for working with Neil Gaiman, Susanna Clarke, George R.R. Martin, Terri Windling, Ellen Datlow, and many other big names in the literary industry. Educated at Virginia Commonwealth University, Vess is primarily known for his work in fantasy, with many of his designs and drawings being implemented within major mythological based comic books and pieces. Vess is perhaps best known for Sandman, Stardust, and Bone.