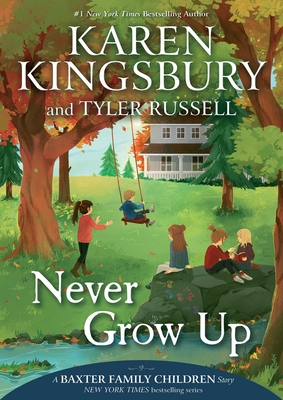 By  Karen Kingsbury , Tyler Russell , Illustrated By  Olivia Chin Mueller
Hardcover
$ 17.99
Out of Stock In Store (Click to Order)

In the third book in Karen Kingsbury and Tyler Russell’s beloved series about the Baxter children, Ashley and Kari Baxter struggle with what it means to grow up.

When Kari Baxter is assigned an essay about what she wants to be when she grows up, her mind goes blank. She doesn’t want to grow up; she wants everything to stay just like it is. But Kari comes to realize that while making time stand still isn’t possible, she can enjoy every moment with her best family ever.

Meanwhile, Ashley Baxter feels the same way. She is worried her siblings are growing up too fast. When she wins the role of Wendy in her school performance of Peter Pan, Ashley gets an idea. Maybe she and her siblings can pledge to never grow up at all!

This third story in the Baxter Family Children series shares the reassuring message that even though growing up can be tough, family and friends are always there with support and love.

Tyler Russell has been telling stories his whole life. In elementary school, he won a national award for a children’s book he wrote, and he has been writing ever since. In 2015, he graduated with a BFA from Lipscomb University. Soon after, he sold his first screenplay, Karen Kingsbury’s Maggie’s Christmas Miracle, which premiered in December of 2017 on Hallmark. Along with screenplays and novels, Tyler is a songwriter, singer, actor, and creative who lives in Nashville, Tennessee, where he enjoys serving his church, adventuring around the city, and spending time with his family.