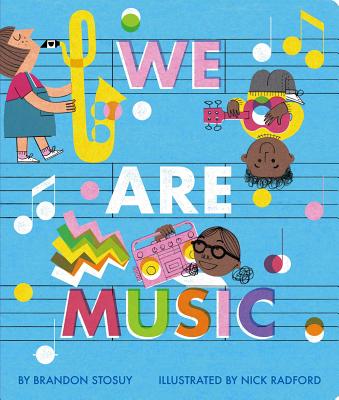 By  Brandon Stosuy , Illustrated By  Nick Radford
$ 8.99
Out of Stock In Store (Click to Order)

From the author of Music Is... Brandon Stosuy comes a second pitch-perfect board book that’s a kid-friendly music history lesson—perfect for the little record collectors in your life.

From music writer and The Creative Independent/Kickstarter Editor in Chief, Brandon Stosuy, comes a new board book called We Are Music that dives into the history of music.

It starts with clapping, tapping, and drums, and from there the music moves in many different directions. From classical to blues to jazz to country to rock to punk to rap to hip hop, there is one important thread that weaves through every song that has ever been created: us.

Brandon Stosuy is the Editor in Chief of The Creative Independent/Kickstarter. He previously worked as Director of Editorial Operations at Pitchfork. Brandon is a music curator at MoMA PS1 in New York City and the Broad Museum in Los Angeles, and he curates the annual Basilica Soundscape festival in Hudson, New York. He lives in Brooklyn with his wife and two children.

Nick Radford is an illustrator, musician, dad(ford), and record collector. He has produced illustration work for the likes of Google, The Guardian, DK, Bantam Press, BBC, LG, Vodafone, Cadbury, Easyjet, and Kodak—as well as a host of independent magazines, clothing and record labels, and events. Signed to Ubiquity Records (USA) as one half of The Mighty Sceptres, Nick’s music has also seen previous releases on Freestyle Records (UK) as Frootful; remixes by Kenny Dope; tracks appearing on cult US TV show Ray Donovan and a Steven Soderbergh film; and features by Wax Poetics and KCRW. His music showcases his love of 50s and 60s soul, R ’n’ B, and jazz…the kind of thing he plays on original forty-fives with collector friends at his monthly night, Soul Cookin’.