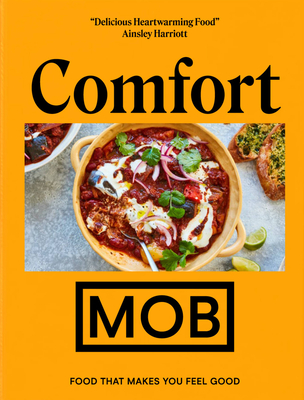 It's the return of Mob Kitchen! This time celebrating all things crispy, squidgy, cheesy, spicy, warming, sticky, nourishing... all the flavors, textures and feel of comfort pulled together in one book, 100 recipes.

MOB Comfort is a celebration of hearty dishes from around the world that warm, soothe and fill us. Spending time in the kitchen recreating comfort is a way to indulge in dishes from the past and find new flavor and texture combinations that appeal to our senses.

Featuring old-school bangers with a Mob Kitchen twist such as Chicken and Chorizo Enchilladas or Beef Brisket Lasagne, and modern dishes like Sriracha Crispy Tofu or Coca Cola Chicken Wings, MOB Comfort encourages you to indulge every palate and craving in a fun, affordable and achievable way. Though if you're in a hurry but need a quick dose of comfort, recipes like the Grilled Halloumi and Peach Burger with Chipotle Mayo or Ben's Dad's Puttanesca will hit the spot in no time. For an extra dose of comfort, follow Mob's recipes for making your own pasta, focaccia and gnocchi to take your meal to the next level. Mob have also cooked up some cosy dessert recipes to finish - try Miso Sticky Toffee Pudding or extra-oozy Chocolate Jaffa Pool.

MOB COMFORT is a nod to homeliness and cozy nights spent cooking with friends and family, recapturing the feeling of better, safer times with food that loves you back.

Ben Lebus has always been passionate about food and learned to cook from his father, who ran an Italian restaurant for a number of years. At university, he quickly saw that his flatmates did not share his knowledge of cooking, and their repertoire consisted of pasta with pesto. That was it; he launched MOB Kitchen three months after he graduated. "The thrifty home-cook's unlikely hero," according to the Daily Mail, Ben has harnessed a strategic group of supporters and collaborators, including sponsoring university sports team kits around the UK, collaborating with Waitrose, the Co-op, Sainsbury's, Ocado and dating app Bumble.