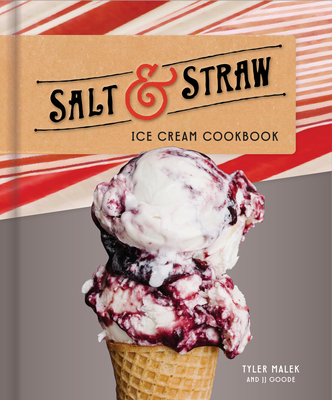 Based out of Portland, Oregon, Salt & Straw is the brainchild of two cousins, Tyler and Kim Malek, who had a vision but no recipes. They turned to their friends for advice—chefs, chocolatiers, brewers, and food experts of all kinds—and what came out is a super-simple base that takes five minutes to make, and an ice cream company that sees new flavors and inspiration everywhere they look.

Using that base recipe, you can make dozens of Salt & Straw’s most beloved, unique (and a little controversial) flavors, including Sea Salt with Caramel Ribbons, Roasted Strawberry and Toasted White Chocolate, and Buttered Mashed Potatoes and Gravy.

But more importantly, this book reveals what they’ve learned, how to tap your own creativity, and how to invent flavors of your own, based on whatever you see around you. Because ice cream isn’t just a thing you eat, it’s a way to live.

“Making ice cream at home is already enough of a mental hurdle. . . . Salt & Straw is out to prove us wrong with a new cookbook . . . making crazy ice cream flavors is more than doable—it’s addictive.”—Portland Monthly

“The approachable, you-can-do-this nature of the book should be all that home cooks need to try it out.”—Eater

“I originally sought out this book solely because of the Meyer Lemon Blueberry Buttermilk Custard. . . . It is the greatest ice cream flavor that’s ever existed and, because it’s only a seasonal flavor in their stores, I needed the recipe so I could make it whenever I wanted.”—Bon Appétit

“Few of America’s many ice cream makers are as seasonally minded and downright creative as Salt & Straw co-founder Tyler Malek.”—GrubStreet

TYLER MALEK is head ice cream maker for Salt & Straw Ice Cream in Portland, Oregon. Since opening in early 2011, Malek and his cousin, founder and owner Kim Malek, have taken their ice cream from a single pushcart to 11 brick-and-mortar locations, creating more than 230 flavors. Malek was selected as one of Forbes's 30 Under 30 and was an Eater Young Guns Semi-Finalist in 2013.

JJ GOODE is a Brooklyn-based food writer and the coauthor of the books A Girl and Her Pig with April Bloomfield, Pok Pok with Andy Ricker, State Bird Provisions with Stuart Brioza and Nicole Krasinski, among others.