My Own Devices: True Stories from the Road on Music, Science, and Senseless Love 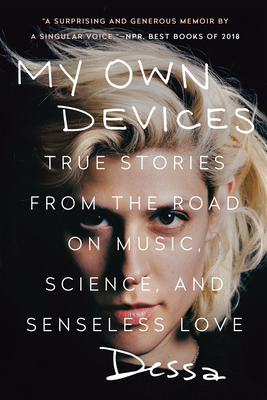 My Own Devices: True Stories from the Road on Music, Science, and Senseless Love

By  Dessa
Paperback
$ 17
Order Online (Out of Stock In Store)

“I love the way Dessa puts words together. In her songs, in her poetry, in her short stories, and now in this beautiful and candid memoir.  Wanna be an artist? Get this book.”
--Lin-Manuel Miranda

"Dessa writes beautifully about a wide range of topics, including science, music, and the pain that comes with being in love; it's a surprising and generous memoir by a singular voice."
--NPR, Best Books of 2018

Dessa defies category--she is an intellectual with an international rap career and an inhaler in her backpack; a creative writer fascinated by philosophy and behavioral science; and a funny, charismatic performer dogged by blue moods and heartache. She's ferocious on stage and endearingly neurotic in the tour van. Her stunning literary debut memoir stitches together poignant insights on love, science, and language--a demonstration of just how far the mind can travel while the body is on a six-hour ride to the next gig.

In "The Fool That Bets Against Me," Dessa writes to Geico to request a commercial insurance policy for the broken heart that's helped her write so many sad songs. "A Ringing in the Ears" tells the story of her father building a wooden airplane in their backyard garage. In "'Congratulations,'" she describes the challenge of recording a song for The Hamilton Mixtape in a Minneapolis basement, straining for a high note and hoping for a break. "Call Off Your Ghost" chronicles the fascinating project she undertook with a team of neuroscientists to try to clinically excise romantic feelings for an old flame. Her writing is infused with scientific research, dry wit, a philosophical perspective, and an abiding tenderness for the people she tours with and the people she leaves behind to be on the road.

My Own Devices is an uncompromising and candid account of a life in motion, in music, and in love. Dessa is as compelling on the page as she is onstage, making My Own Devices the debut of a unique and deft literary voice.

Dessa is a rapper, a singer, an essayist, and a proud member of the Doomtree hip-hop crew. She's performed around the world at opera houses and rock clubs and while standing on barroom tables. She's landed on the Billboard Top 200 Albums list as a solo artist (Parts of Speech, Chime), as a Doomtree member (All Hands), and as a contributor to The Hamilton Mixtape. As a writer, she's contributed to the New York Times Magazine, Minnesota Public Radio, the Star Tribune (Minneapolis), Minnesota Monthly, literary journals across the country, and has published two short collections of poetry and essays. She now splits her time between Manhattan, Minneapolis, and a tour van cruising at six miles per hour above the posted limit.