The Destiny Thief: Essays on Writing, Writers and Life 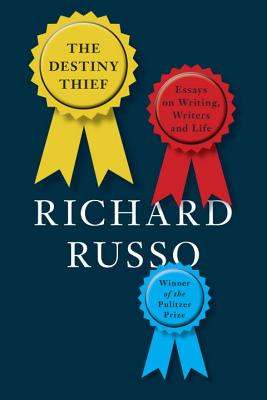 The Destiny Thief: Essays on Writing, Writers and Life

"It turns out that Russo the nonfiction writer is a lot like Russo the Pulitzer Prize-winning novelist. He is affably disagreeable, wry, idiosyncratic, vulnerably bighearted, a craftsman of lubricated sentences."—Jay Fielden, New York Times Book Review

A master of the novel, short story, and memoir, the best-selling and Pulitzer Prize-winning author of Everybody's Fool now gives us his very first collection of personal essays, ranging throughout writing and reading and living.

In these nine essays, Richard Russo provides insight into his life as a writer, teacher, friend, and reader. From a commencement speech he gave at Colby College, to the story of how an oddly placed toilet made him reevaluate the purpose of humor in art and life, to a comprehensive analysis of Mark Twain's value, to his harrowing journey accompanying a dear friend as she pursued gender-reassignment surgery, The Destiny Thief reflects the broad interests and experiences of one of America's most beloved authors. Warm, funny, wise, and poignant, the essays included here traverse Russo's writing life, expanding our understanding of who he is and how his singular, incredibly generous mind works. An utter joy to read, they give deep insight into the creative process from the prospective of one of our greatest writers.

RICHARD RUSSO is the author of eight novels, most recently Everybody's Fool and That Old Cape Magic; two collections of stories, with Trajectory published in 2017; and the memoir Elsewhere. In 2002 he received the Pulitzer Prize for Empire Falls, which like Nobody's Fool was adapted to film, in a multiple-award-winning HBO miniseries; in 2016 he was given the Indie Champion Award by the American Booksellers Association; and in 2017 he received France's Grand Prix de Littérature Américaine. He lives in Portland, Maine.