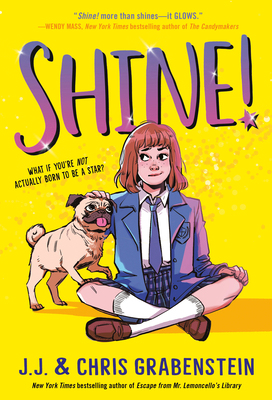 By  J.J. Grabenstein , Chris Grabenstein
Paperback
$ 7.99
Pre-Order (Not Yet Published)

Everyone deserves to shine in this sparkling book about a girl who's trying to find her place in the universe--and middle school--from the New York Times bestselling author of Escape from Mr. Lemoncello's Library!

Shine on! might be the catchphrase of twelve-year-old Piper's hero--astronaut, astronomer, and television host Nellie Dumont Frisse--but Piper knows the truth: some people are born to shine, and she's just not one of them. That fact has never been clearer than now, when her dad's new job has landed them both at Chumley Prep, a posh private school where everyone seems to be the best at something and where Piper definitely doesn't fit in.

Bursting with humor, heart, science, possibilities, and big questions, Shine! is a story about finding your place in the universe--a story about figuring out who you are and who you want to be. BONUS! Science experiment included!

J.J. & CHRIS GRABENSTEIN are a husband-wife team. J.J. is an award-winning voice-over and stage performer. Chris is a New York Times bestselling author of many books, including the Mr. Lemoncello series, as well as the coauthor of numerous books with James Patterson, including Word of Mouse and Max Einstein. J.J. and Chris live in New York City. Visit them online at ChrisGrabenstein.com and on Twitter at @CGrabenstein.