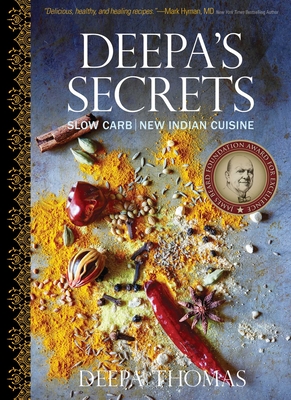 By  Deepa Thomas , Foreword by  Curt Ellis
Paperback
$ 24.99
Likely On Our Shelves

A journey from old traditions to modern Indian cooking with deliciously simple and gut-healing recipes that leave you feeling fulfilled—rather than full.

Upon learning that rice and bread were the culprits for her husband’s Type 2 diabetes, Deepa Thomas deconstructed and reinvented her native Indian cuisine. Deepa made anew seventy low carb recipes, incorporating time-saving Western cooking techniques, breaking-news research on gut health and weight loss, and Ayurvedic wisdoms ("When diet is right, medicine is of no need; and when diet is wrong, medicine is of no use."). After six months of cooking and eating "New Indian," Deepa lost twenty pounds and freed her husband from a ten-year routine of insulin shots.

Part cookbook and memoir, Deepa’s Secrets introduces breakthrough slow carb and gut-healing recipes that are simple and nutrient-packed, without sacrificing its rich South Asian flavors. On a mission to demystify and make healthy an “exotic” cuisine, Deepa shares shortcuts and techniques that will make "New Indian" everyday fare. Bold and intimate, Deepa’s Secrets will undoubtedly change your cooking, and quite possibly your life, featuring East-to-West recipes such as:

The author is donating her royalties to FoodCorps, a nonprofit that connects children to healthy food in American schools.

Deepa Thomas is a graduate of Delhi University with degrees in journalism and political science. She moved to the US and, in 1985, founded Deepa Textiles. After 21 years and 23 design awards, the company has been credited with transforming the $10 billion a year contract furniture industry. Since 2010, Deepa has combined her passion for journalism with her newfound passion for cooking, deconstructing the principles of the most successful diets and healthy living practices in order to reconstruct a simple, slow carb "New Indian" cuisine. Deepa has served as a trustee of Rhode Island School of Design and a Commissioner of the Asian Art Museum. She is currently a trustee of Grace Cathedral in San Francisco. She won the James Beard Award in 2018 for her cookbook / memoir, Deepa’s Secrets. Deepa Thomas lives with her husband, not far from her two sons, in the Nob Hill section of San Francisco.

Curt Ellis, author of the foreword, is an American filmmaker, social entrepreneur, and advocate for sustainable agriculture. He is the CEO of the nonprofit organization FoodCorps.