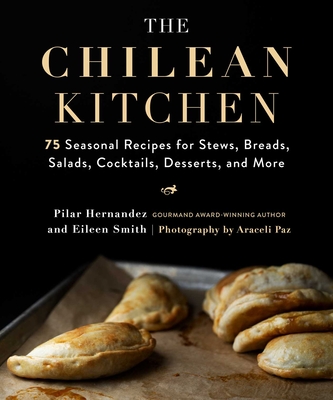 By  Pilar Hernandez , Eileen Smith , Contributions by  Araceli Paz
$ 24.99
Out of Stock In Store (Click to Order)

These authentic recipes will bring classic Chilean flavors to your doorstep!

The Spanish phrase quédate un poquito, or “stay a while,” is the essence of Chilean hospitality—one does not “stop by for a quick bite” in Chile. Comprised of more than seventy authentic Chilean recipes, organized seasonally for maximum freshness, and tweaked ever-so-slightly to fit neatly into the US market, this book creates an accessible, authentic, and uniquely Chilean cooking experience. It marries Pilar’s family recipes and Eileen’s astute writings, which make even those who have never visited Chile feel like they have found home.

Seasonality is the backbone of the Chilean table—each of the four seasonal sections will include a short opening essay to prepare the reader for the bounty of the season. A unique fifth section is included for La Once, or tea time, which transcends the seasons but is quintessentially and irrevocably Chilean.

Pilar Hernandez was born into a traditional family in central Chile. She was raised by confident home cooks in a matriarchal household chock-full of traditional Chilean food. In 2008, Pilar began to share her zeal for Chilean cuisine on her (now) award-winning recipe blog En Mi Cocina Hoy. She has twice been recognized as one of the 100 Top Latina Bloggers. She is the author of Del Blog A La Mesa, which was awarded Gourmand Best Blogger Cookbook in Chile. In addition to all of her community involvement and ongoing recipe development, she feeds her husband and two American children a steady diet of Chilean food at their home in Houston, Texas.

Eileen Smith is a bilingual travel and food writer and photographer originally from New York who moved to Santiago, Chile, in 2004. Of all of the charms of Chilean life, she most especially loves how Chileans tend to use their hands to describe how to make different dishes, miming cutting, mixing, or kneading as they explain recipes. Eileen writes mainly about food, travel, and Chile, and has written extensively for NPR’s The Salt, Fodor’s, Lonely Planet, Tales of the Cocktail, Latin Kitchen, Paste, Dwell, Ensemble, New Worlder, and many others. She has essays in books by Oxford University Press and HarperCollins. She currently works with Upscape Travel interviewing chefs and winemakers, writing itineraries, and helping to storyboard and produce travel videos.