Death in a Desert Land: A Novel 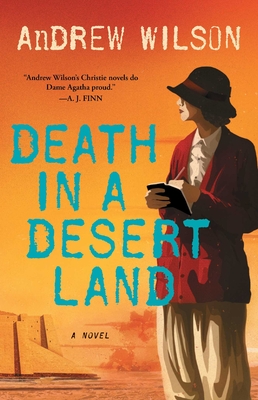 Death in a Desert Land: A Novel

“Fizzy with charm yet edged with menace, Andrew Wilson’s Christie novels do Dame Agatha proud. Perfect for fans of Ruth Ware and Jacqueline Winspear.” —A.J. Finn, internationally bestselling author of The Woman in the Window

Queen of Crime Agatha Christie returns to star in another stylish mystery, as she travels to the excavation of the ancient city of Ur where she must solve a crime with motives that may be as old as civilization itself.

Fresh from solving the gruesome murder of a British agent in the Canary Islands, mystery writer Agatha Christie receives a letter from a family who believe their late daughter met with foul play. Before Gertrude Bell overdosed on sleeping medication, she was a prominent archaeologist, recovering ancient treasures in the Middle East. Found near her body was a letter claiming that Bell was being followed and to complicate things further, Bell was competing with another archeologist, Mrs. Woolley, for the rights to artifacts of immense value.

Christie travels to far-off Persia, where she meets the enigmatic Mrs. Woolley as she is working on a big and potentially valuable discovery. Temperamental but brilliant, Mrs. Woolley quickly charms Christie but when she does not hide her disdain for the recently deceased Miss Bell, Christie doesn’t know whether to trust her—or if Bell’s killer is just clever enough to hide in plain sight.

With Wilson’s signature “strong characters, shrewd plotting and a skillful blending of fact and fiction” (Shelf Awareness, starred review on A Talent for Murder), this is a thrilling adventure set amidst the cursed ruins of an ancient land.

Andrew Wilson is an award-winning journalist and author. His work has appeared in a wide variety of publications including the Guardian, the Washington Post, the Sunday Times, and the Smithsonian Magazine. He is the author of four acclaimed biographies, a book about the survivors of the Titanic, and the novels, The Lying Tongue, A Talent for Murder, A Different Kind of Evil, Death in a Desert Land.