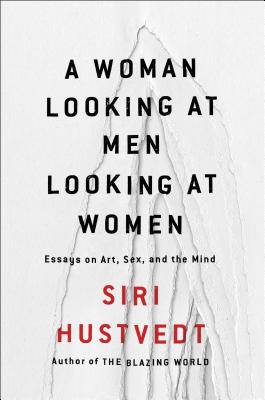 A compelling and radical collection of essays on art, feminism, neuroscience, psychology, and philosophy from prize-winning novelist Siri Hustvedt, the acclaimed author of The Blazing World and What I Loved.

Siri Hustvedt has always been fascinated by biology and how human perception works. She is a lover of art, the humanities, and the sciences. She is a novelist and a feminist. Her lively, lucid essays in A Woman Looking at Men Looking at Women begin to make some sense of those plural perspectives.

Divided into three parts, the first section, “A Woman Looking at Men Looking at Women,” investigates the perceptual and gender biases that affect how we judge art, literature, and the world in general. Among the legendary figures considered are Picasso, De Kooning, Jeff Koons, Louise Bourgeois, Anselm Kiefer, Susan Sontag, Robert Mapplethorpe, the Guerrilla Girls, and Karl Ove Knausgaard.

The second part, “The Delusions of Certainty,” is about the age-old mind/body problem that has haunted Western philosophy since the Greeks. Hustvedt explains the relationship between the mental and the physical realms, showing what lies beyond the argument—desire, belief, and the imagination.

The final section, “What Are We? Lectures on the Human Condition,” discusses neurological disorders and the mysteries of hysteria. Drawing on research in sociology, neurobiology, history, genetics, statistics, psychology, and psychiatry, this section also contains a profound and powerful consideration of suicide.

There has been much talk about building a beautiful bridge across the chasm that separates the sciences and the humanities. At the moment, we have only a wobbly walkway, but Hustvedt is encouraged by the travelers making their way across it in both directions. A Woman Looking at Men Looking at Women is an insightful account of the journeys back and forth.

Siri Hustvedt is the internationally acclaimed author of a book of poems, six novels, four collections of essays, and a work of nonfiction. In 2012 she was awarded the International Gabarron Prize for Thought and Humanities. Her novel The Blazing World was longlisted for the Man Booker Prize and won the Los Angeles Book Prize for Fiction. She has also published numerous papers in scholarly and scientific journals. She has a PhD in English literature from Columbia University and is a Lecturer in Psychiatry at Weill Cornell Medical College. Her work has been translated into over thirty languages. She lives in Brooklyn, New York.

"Richly explored...and, when art is the subject, touchingly personal...It's hard to overstate the pleasure and the comfort that such demystification provides...it does indeed make the world feel larger, more expansive, more alive to the touch."
—New York Times Book Review

“A wide-ranging, irreverent, and absorbing meditation on thinking, knowing, and being.”
—Kirkus Reviews (starred review)

"Canonical . . . A dense, succinct overview of the mind/body problem . . . Conveys the wide range of Hustvedt’s reading as she focuses on the interstices between people; between disciplines; and between concepts such as art and science, truth and fiction, feeling and perception."
—Publishers Weekly

"Hustvedt has provided us with an impressive collection that celebrates critical thinking."
—The Guardian

"We are fortunate to have Hustvedt voicing doubt so intelligently."
—Financial Times

“A brilliant explorer of brain and mind.”
--Oliver Sacks

“No one writing about art today comes closer than Siri Hustvedt to the elusive strangeness of a great painting.”
--Calvin Tomkins

“[Siri Hustvedt] brings both knowledge and an artist’s insight to the discussion of memory, language, and personal identity… It is Hustvedt’s gift to write with exemplary clarity of what is by necessity unclear.”
--Hilary Mantel

“[Hustvedt’s] responses to paintings are both visceral and intellectual…At their best, her essays combine the insights of her intuitive eye with an extensive knowledge of Western painting.”
--San Francisco Chronicle

“Armed with her great gift for elucidation, the novelist and essayist Siri Hustvedt has omnivorously devoured and digested complex debates from neuroscience, psychiatry, philosophy and psychoanalysis and journeyed into the mind/body problem.”
—George Makari

PRAISE FOR THE BLAZING WORLD

LONGLISTED FOR THE MAN BOOKER PRIZE

"The Blazing World offers a spirited romp...constructed as a Nabokovian cat's cradle....Hustvedt's portrait of the artist as a middle-aged widow is searingly fresh. It's rare to encounter a female protagonist who throws her weight around quite so grandiloquently as Harriet Burden, a heroine who is—well, more like the hero of a Philip Roth or a Saul Bellow novel."
— New York Times Book Review

“Ingeniously and energetically put together. . . . The Blazing World never runs out of steam in dispensing ideas and peeling back layers of truth.”
— Chicago Tribune

“The Blazing World is Siri Hustvedt’s best novel yet, an electrifying work with a titanic, poignantly flawed protagonist. Harriet Burden’s rage, turbulence and neediness leap off these pages in a skillfully orchestrated chorus of voices both dark and brilliant.”
— The Washington Post

“Incandescent. . . . Hustvedt’s greatest triumph here is not the feminist argument she makes. It’s that we ache for her characters. This is a muscular book, and just enough of that muscle is heart.”
— The Boston Globe

“A glorious mashup of storytelling and scholarship. . . .[The Blazing World’s] touching conclusion ‘blazes hot and bright’ from the perspective of an aura reader, Harriet's caretaker, whose vision of the artist's work is at once spiritually charged and whimsical.”
— The San Francisco Chronicle

"In certain respects, The Blazing World is a didactic novel, presenting arguments about the place of gender in American cultural life, yet it avoids preaching or settled judgments by putting at its center a figure whose strongly held beliefs are undermined by the hazards of real life. The effect is more fluid and nuanced than any scholarly study or political diatribe could be."
— The Wall Street Journal

“The Blazing World is unique and recognizably so, a bracing examination of the act of creation, of fame and identity, gender bias and feminism, love and desire, psychology and philosophy. . . . Full of life and ideas and intellectual prowess, it’s also a compelling story with richly drawn characters. . . .[An] extraordinary puzzle.”
— The Miami Herald

“This is feminism in the tradition of Simone de Beauvoir’s The Second Sex, or Virginia Woolf’s A Room of One’s Own: richly complex, densely psychological, dazzlingly nuanced. And at the same time, the book is a spectacularly good read. Its storytelling is magnificent, its characters vivid, its plot gripping; it’s rare that a novel of ideas can be so much fun.”
— Slate

"Siri Hustvedt has earned her reputation as a brilliant thinker and articulate writer. This is not her first work of fiction, and The Blazing World is strong proof that her talents are unmatched in the genre. . . a delightful, quirky story that shares many truths about women in the arts, and the struggles they encounter in rising to fame."
— Seattle Post-Intelligencer

“Dazzling. . . ingeniously constructed. . . . The Blazing World is a serious, sometimes profound book, tackling head-on the knotty issues of identity and sense of self, and our unconscious ideas about gender and celebrity. It offers an exhilarating reading experience for anyone willing to meet its challenge.”
— Pittsburgh Post-Gazette

“Siri Hustvedt has a rare gift for finding the human heart in what might be cerebral musings and rarefied settings.”
— Columbus Dispatch

“Immediately engrossing. . . . None of the narrators, even Harriet, are precisely reliable, and this ingeniously supports Harriet’s own theory that we are all just monsters wearing masks.”
— San Antonio Current

"The absence of women artists in the history of painting is an old feminist topic, but it is one The Blazing World approaches head-on."
— The Guardian

"Hustvedt’s novels – What I Loved, The Enchantment of Lily Dahl, The Summer Without Men, among others – have always been smart, accomplished, critically acclaimed but this one feels like a departure. There is more heat in it, more wildness; it seems to burst on to a whole other level of achievement and grace."
— Financial Times

"Densely brilliant, but terrifyingly clever too... you don’t need a PhD in Kierkegaard to enjoy Hustvedt’s writing, and it’s a pleasure to feel your brain whirring as it forges links and finds the cracks across differing accounts. Even if The Blazing World is about ambiguity and mutability in everything from authorship to gender to memory, Hustvedt’s text is carefully, impressively constructed: she’s as convincing in each fictional voice as Harriet is in her masks."
— The Independent

"An exuberantly clever piece of work.... [A] novel that gloriously lives up to its title, one blazing with energy and thought."
— The Times

“Masterful. . . .[Hustvedt’s] long-running explorations have rarely been merged together as fluidly as they are here, an achievement that has everything to do with rendering the novel’s abundant intellect in a deeply felt and accessible manner. Six novels and more than two decades into her career, it is altogether fair to argue that Siri Hustvedt is quietly becoming one of North America’s most subversive and fearlessly intelligent writers.”
— Toronto Star

"Both intellectually and emotionally gripping… the generosity of the storytelling leads to full and often affecting backstories for all the main characters… [it] feels like one of those novels in which a well-established author triumphantly sums up, and possibly even surpasses, everything they’ve done before."
— The Spectator

“The Blazing World is poundingly alive with ideas, personalities, conviction, fear, fakery, ambition, and sorrow. The reading mind is set on high, happy alert.”
— The New York Journal of Books

“Larger-than-life Harry reads vociferously, loves fervently, and overflows with intellectual and creative energy….Hustvedt dissects the art world with ironic insight….This is a funny, sad, through-provoking, and touching portrait of a woman who is blazing with postfeminist fury and propelled by artistic audacity."
— Publishers Weekly

“Readers of Hustvedt’s essay collections (Living, Thinking, Looking, 2012, etc.) will recognize the writer’s long-standing interest in questions of perception, and her searching intellect is also evident here. But as the story of Harry’s life coheres . . . it’s the emotional content that seizes the reader . . . As in her previous masterpiece, What I Loved (2003), Hustvedt paints a scathing portrait of the art world, obsessed with money and the latest trend, but superb descriptions of Harry’s work—installations expressing her turbulence and neediness—remind us that the beauty and power of art transcend such trivialities . . . Blazing indeed: not just with Harry’s fury, but with agonizing compassion for all of wounded humanity.”
— Kirkus Reviews (Starred Review)

“Intelligent and . . . knowledgeable about the world of modern art, theory, and philosophy, Hustvedt describes in detail the insular world of the New York City art scene.”
— Library Review