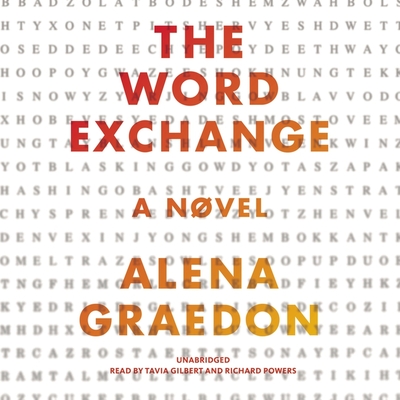 A fiendishly clever dystopian novel for the digital age, The Word Exchange is a fresh, stylized, and decidedly original debut about the dangers of technology and the power of the printed word. In the not-so-distant future, the forecasted "death of print" has become a reality. Bookstores, libraries, newspapers, and magazines are a thing of the past, as we spend our time glued to handheld devices called memes that not only keep us in constant communication but have become so intuitive as to hail us cabs before we leave our offices, order takeout at the first growl of a hungry stomach, and even create and sell language itself in a marketplace called the Word Exchange. Anana Johnson works with her father, Doug, at the North American Dictionary of the English Language, where he is hard at work on the last edition that will ever be printed. Doug is a staunchly anti-meme, anti-tech intellectual who fondly remembers the days when people used e-mail to communicate--or even actually spoke to one another. One evening, Doug disappears, leaving a single written clue: ALICE--a code word he and Anana devised to signal if one of them ever fell into harm's way. Thus begins Anana's journey down the proverbial rabbit hole. Joined by Bart, her bookish colleague, Anana's search for Doug will take her into dark basement incinerator rooms, underground passages of the Mercantile Library, secret meetings of the anonymous Diachronic Society, the boardrooms of the evil online retailing site Synchronic, and ultimately to the hallowed halls of the Oxford English Dictionary--spiritual home of the written word. As Ana pieces together what is going on, and Bart gets sicker and sicker with the strange "word flu" that has spread worldwide and causes people to speak in gibberish, Alena Graedon crafts a fresh, cautionary tale that is at once a technological thriller and a thoughtful meditation on the price of technology and the unforeseen, though very real, dangers of the digital age.