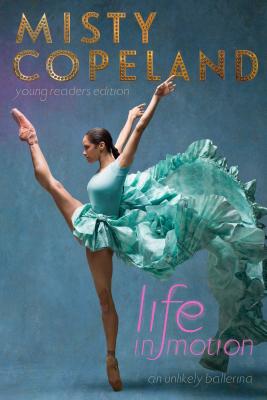 By  Misty Copeland
Hardcover
$ 18.99
Out of Stock In Store (Available to Order)

A bestselling and prize-winning memoir by African-American ballerina Misty Copeland, Life in Motion is the vividly told story of her journey to the world-class American Ballet Theatre—and delves into the harrowing family conflicts that nearly drove her away from ballet as a thirteen-year-old prodigy.

Determination meets dance in this New York Times bestselling memoir by the history-making ballerina Misty Copeland, recounting the story of her journey to become the first African-American principal ballerina at the prestigious American Ballet Theatre. When she first placed her hands on the barre at an after-school community center, no one expected the undersized, underprivileged, and anxious thirteen-year-old to become one of America’s most groundbreaking dancers . A true prodigy, she was attempting in months roles that take most dancers years to master. But when Misty became caught between the control and comfort she found in the world of ballet and the harsh realities of her own life, she had to choose to embrace both her identity and her dreams, and find the courage to be one of a kind.

With an insider’s passion, Misty opens a window into the life of an artist who lives life center stage, from behind the scenes at her first classes to her triumphant roles in some of the world’s most iconic ballets. A sensational memoir as “sensitive” and “clear-eyed” (The Washington Post) as her dancing, Life in Motion is a story of passion, identity and grace for anyone who has dared to dream of a different life.

Misty Copeland made history by becoming the first African American female principal dancer at American Ballet Theatre. The bestselling author of Life in Motion and a children’s picture book, Firebird, she is the recipient of the Leonore Annenberg Fellowship in the Arts and an inductee into the Boys and Girls Club Alumni Hall of Fame. In 2015, Misty was named to Time magazine’s 100 list and was one of Glamour magazine’s “Women of the Year.” She lives in New York City. Visit her online at MistyCopeland.com.