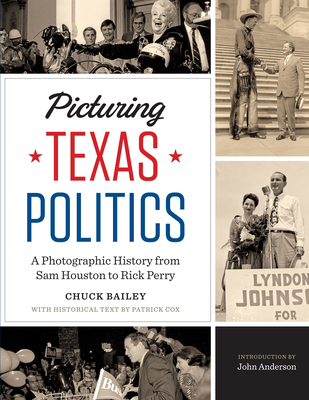 The Republic of Texas was founded in 1839, around the time that photography was being invented. So while there were no photographers at the Alamo or San Jacinto, they arrived soon after to immortalize, on film, Sam Houston, David Burnett, Mirabeau Lamar, and many other founding fathers of the Lone Star State. Over the following nearly two centuries, Texas politics and politicians have provided reliable, often dramatic, and sometimes larger-than-life subjects for photographers to capture in the moment and add to the historical record. Picturing Texas Politics presents the first photographic album of Texas politicians and political campaigns ever assembled. Chuck Bailey has searched archives, museums, libraries, and private collections to find photographs that have never been published, as well as iconic images, such as Russell Lee's pictures of one of Ralph Yarborough's campaigns. These photographs are arranged into four chronological sections, each one introduced by historian Patrick Cox, who also provides informative photo captions. The photographs display power and political savvy from the early Republic to Lyndon Johnson and Bob Bullock; unmatched dedication to Texas in the Hobby and Bush families; and the growing influence of women in politics, from Miriam "Ma" Ferguson to Barbara Jordan, Ann Richards, and Kay Bailey Hutchison. With Sam Houston's jaguar vest, W. Lee "Pappy" O'Daniel's hillbilly band, a famous governor with an ostrich, and prominent Texans eating watermelons, shooting guns, and riding horses, this is Texas politics at its liveliest and best.

CHUCK BAILEYAustin, TexasA lawyer in private practice, Bailey has also served as assistant general counsel to Texas Governor William P. Clements and chief of staff to Lieutenant Governor Bob Bullock. He is the author of Texas Political Memorabilia: Buttons, Bumper Stickers, and Broadsides.PATRICK COXWimberley, TexasCox is an author and public history consultant who previously served as associate director of the Dolph Briscoe Center for American History at the University of Texas at Austin. His many books include Writing the Story of Texas.