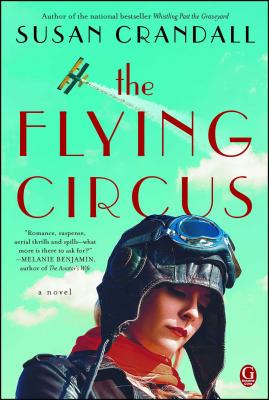 By  Susan Crandall
Paperback
$ 16.99
Order Online (Out of Stock In Store)

The award-winning, national bestselling author of Whistling Past the Graveyard sends an unlikely trio on an exhilarating adventure high above the American Midwest of the 1920s in a spirited, “entertaining surprise” (Publishers Weekly) of a novel in league with Water for Elephants and The Aviator’s Wife.

They are barnstormers…the daredevil fliers whose airborne acrobatics are a thrilling spectacle crisscrossing the Heartland skies. Rising above each of their circumstances in their own “flying circus” are Cora Rose Haviland, a privileged young woman left penniless when her father’s fortune is lost; Charles “Gil” Gilchrist, a World War I pilot whose traumatic past fuels his death-defying stunts; and eighteen-year-old Henry Schuler, the son of a German immigrant farmer, on the run from shocking accusations. Each holds secrets that could destroy their makeshift family. And, on their adrenaline-charged journey of self-discovery, one of them must pay the price.

With the poignant and powerful storytelling voice that made Whistling Past the Graveyard “a classic, a book people want to pass along for generations to come” (Feathered Quill Book Reviews), Susan Crandall artfully weaves the stories of three unforgettable characters, each searching for salvation that waits just beyond the horizon.

Susan Crandall is a critically acclaimed author of women’s fiction, romance, and suspense. She has written several award-winning novels including her first book, Back Roads, which won the RITA award for best first book, as well as Whistling Past the Graveyard, which won the SIBA 2014 Book Award for Fiction. Susan lives in Noblesville, Indiana, with her family.