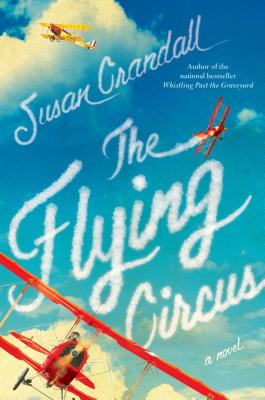 From the bestselling and award-winning author of Whistling Past the Graveyard comes an adventure tale about two daredevils and a farm boy who embark on the journey of a lifetime across America’s heartland in the Roaring Twenties.

Set in the rapidly changing world of 1920s America, this is a story of three people from very different backgrounds: Henry “Schuler” Jefferson, son of German immigrants from Midwestern farm country; Cora Rose Haviland, a young woman of privilege whose family has lost their fortune; and Charles “Gil” Gilchrist, an emotionally damaged WWI veteran pilot. Set adrift by life-altering circumstances, they find themselves bound together by need and torn apart by blind obsessions and conflicting goals. Each one holds a secret that, if exposed, would destroy their friendship. But their journey of adventure and self-discovery has a price—and one of them won’t be able to survive it.

As they crisscross the heartland, exploring the rapidly expanding role of aviation from barnstorming to bootlegging, from a flying circus to the dangerous sport of air racing, the three companions form a makeshift family. It’s a one-of-a-kind family, with members as adventurous as they are vulnerable, and as fascinating as they are flawed. But whatever adventure—worldly or private—they find themselves on, they’re guaranteed to be a family you won’t forget.

Susan Crandall is a critically acclaimed author of women’s fiction, romance, and suspense. She has written several award-winning novels including her first book, Back Roads, which won the RITA award for best first book, as well as Whistling Past the Graveyard, which won the SIBA 2014 Book Award for Fiction. Susan lives in Noblesville, Indiana, with her family.