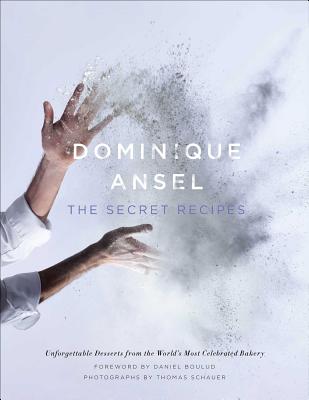 How do you catch lightning in a measuring cup?

Dominique Ansel is the creator of the Cronut™, the croissant-doughnut hybrid that has taken the world by storm. But he’s no one-hit wonder. Classically trained in Paris, responsible for a four-star kitchen in New York, and now the proprietor of New York’s highest rated bakery, Ansel has become a modern-day Willy Wonka: the creator of wildly creative, extraordinarily delicious, and unbelievably popular desserts.

Now, in his hotly anticipated debut cookbook, Ansel shares the secret to transforming the most humble ingredients into the most extraordinary, tempting, and satisfying pastries imaginable. Dominique Ansel: The Secret Recipes reveals the stories and recipes behind his most sought-after creations and teaches lovers of dessert everywhere how to make magic in their own kitchens.

Dominique Ansel, a James Beard Award–winning Pastry Chef, is the chef and owner of eponymous bakeries in New York, London, and Los Angeles, as well as his first-ever restaurant in Los Angeles. Ansel has been responsible for creating some of the most celebrated pastries in the world, including: the Cronut® (named one of TIME Magazine’s “25 Best inventions of 2013”), The Cookie Shot, Frozen S’more, Blossoming Hot Chocolate, and many more. He was named the World’s Best Pastry Chef in 2017 by the World’s Best Restaurants awards. Food & Wine has called him a “Culinary Van Gogh” while the New York Post coined him “the Willy Wonka of New York.” He was also named one of Business Insider’s “Most Innovative People Under 40,” one of Crain’s “40 under 40,” and was bestowed the prestigious l’Ordre du Mérite Agricole, France’s second highest honor.