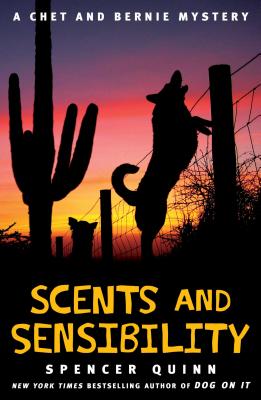 In the eighth installment in the New York Times bestselling mystery series that makes “even cat lovers…howl with delight” (USA TODAY), Chet and his human PI companion, Bernie Little, find themselves in a prickly situation when a mysterious case of illegal cactus smuggling comes to their attention.

In the latest entry in the immensely popular Chet and Bernie mystery series, Private Investigator Bernie Little and his canine companion Chet return home to encounter some alarming developments. First off, Bernie’s wall safe—normally hidden behind the waterfall picture in the office—is gone, and with it Bernie’s grandfather’s watch, their most valuable possession. And next door, old Mr. Parsons is under investigation for being in possession of a saguaro cactus illegally transplanted from the desert. Bernie and Chet go deep into the desert to investigate. Is it possible that such a lovely old couple have a terrible secret in their past?

Chet and Bernie discover bad things going on in the wilderness, far worse that cactus smuggling, and all connected to a strange but innocent-seeming desert festival called Cactus Man. They unearth leads that take them back to a long-ago kidnapping that may not have been a kidnapping and threaten a ruthless and charismatic criminal with a cult following, a criminal who sees at once what Chet and Bernie mean to each other and knows how to exploit it.

Every bit as “insightful” (Booklist), “humorous” (Library Journal), and “deliciously addictive” (Publishers Weekly, starred review) as Quinn’s previous books, Scents and Sensibility is a drool-worthy mystery that will have readers everywhere begging for more.

Spencer Quinn is the bestselling author of eight Chet and Bernie mystery series, as well as the #1 New York Times bestselling Bowser and Birdie series for middle-grade readers. He lives on Cape Cod with his wife Diana—and dogs Audrey and Pearl. Keep up with him by visiting SpenceQuinn.com.