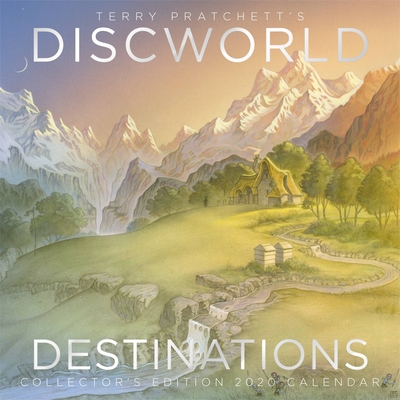 The calendar dates are extensive, and exhaustively researched, and include all major real-time calendrical data for Great Britain, Eire, Australia, New Zealand and the USA, as well as notable Discworld dates.

This year's calendar sees us go on a voyage of discovery. As you head through the year, work your way across the Disc's landscapes: take in the meadows of The Chalk, the peaks of the Ramtops, even the titanic span of Great A'Tuin's flippers.

The first Discworld novel, The Colour of Magic, was published in 1983, and the series is still going strong almost three decades later. Four Discworld novels - Hogfather, Going Postal, The Colour of Magic and The Light Fantastic - have been adapted for television, with more to follow. His books have sold approximately 85 million copies worldwide (but who's counting?), and been translated into forty languages.

Paul Kidby discovered Terry Pratchett's Discworld in 1993 and since then has devoted his working life to the place. He is the illustrator of THE PRATCHETT PORTFOLIO, TERRYPRATCHETT'S DISCWORLD COLOURING BOOK, the bestsellers THE LAST HERO and THEART OF DISCWORLD, as well as the Discworld DIARIES, cards, T-shirts, maps, mugs and, of course, the covers.