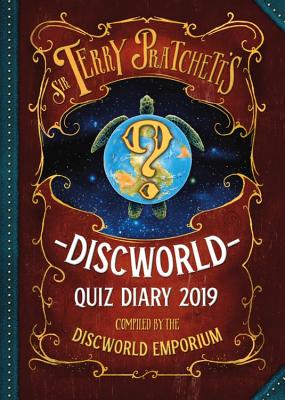 One part diary, one part quiz on the arcane practices of the funniest creation in modern fantasy, 100% Discworld goodness. With their trademark mix of cultural ephemera, background detail and hilarious one-liners, the Discworld diaries are back. This year: trivia.

Put your knowledge to the test, and all will be revealed. Well, except the last one; nobody knows that, not even Dibbler.

These and other gems of knowledge await you within. Make every day a Discworld day, with the 2019 Discworld Quiz Diary.

The first Discworld novel, The Colour of Magic, was published in 1983, and the series is still going strong almost three decades later. Four Discworld novels - Hogfather, Going Postal, The Colour of Magic and The Light Fantastic - have been adapted for television, with more to follow. His books have sold approximately 85 million copies worldwide (but who's counting?), and been translated into thirty-seven languages.