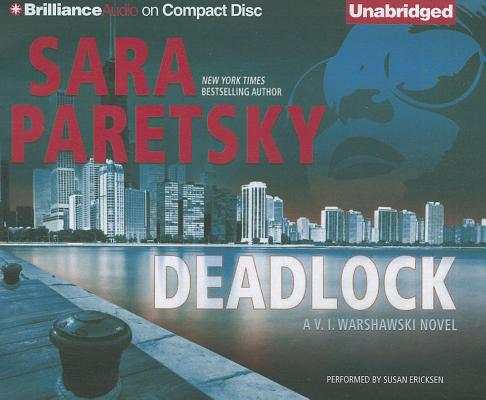 Deadlock, V. I. Warshawski's second case, involves the huge Great Lakes shipping industry. Once again the subject is murder -- this time the "accidental death" of Boom-Boom Warshawski, an ex-hockey star and V. I.'s beloved cousin, who fell -- or was pushed -- off a rain-slicked pier on Chicago's busy waterfront. Convinced that Boom-Boom was in fact killed because of information he had uncovered about criminal doings on the shipping lines, V. I. begins a long and frustrating search for her cousin's murderer. In the course of an investigation that takes her to a remote Canadian port city and a calamitous trip on a sabotaged freighter, V. I. finds all too many possible candidates for the killer, including a grain company executive involved in extortion; and rival heads of two shippers, one of whom is being blackmailed for his criminal past; a hockey player whose specialty is graft; and Boom-Boom's lover, an icily beautiful dancer with expensive tastes in men and merchandise.