The Curse of the Pharaohs (Amelia Peabody #2) 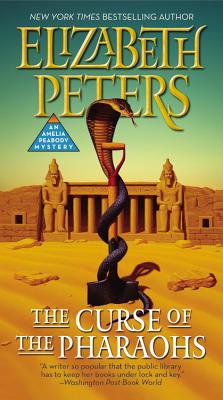 The Curse of the Pharaohs (Amelia Peabody #2)

Egyptologist Amelia Peabody, now a wife and mother, returns in another Victorian-era mystery--to catch a murderer at an excavation of an ancient tomb.
It's 1892, and Amelia and her now-husband Radcliffe Emerson have settled down in Victorian England after their escapade in Egypt. They're raising their young son Ramses and everything seems normal--until they are approached by a damsel in distress. Lady Baskerville's husband, Sir Henry, has died after uncovering what may have been royal tomb in Luxor.
Despite rumors of a curse haunting all those involved with the dig, Amelia and Radcliffe proceed to Egypt and realize that Sir Henry did not die a natural death. Accidents continue to plague the dig, and talk of a pharaoh's curse runs rampant among the group. Amelia begins to suspect that these accidents are caused by a sinister human, but who?

Elizabeth Peters was born and brought up in Illinois and earned her Ph.D. in Egyptology from the University of Chicago's famed Oriental Institute. Peters was named Grand Master at the inaugural Anthony Awards in 1986 and Grand Master by the Mystery Writers of America at the Edgar Awards in 1998. She lives in a historic farmhouse in western Maryland.

You can learn more at:
ameliapeabody.com