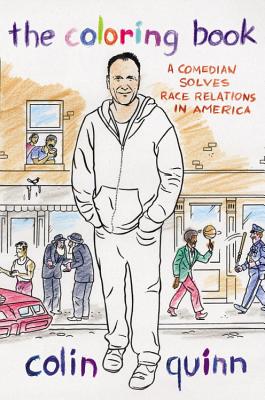 Colin Quinn has noticed a trend during his decades on the road-that Americans' increasing political correctness and sensitivity have forced us to tiptoe around the subjects of race and ethnicity altogether. Colin wants to know: What are we all so afraid of? Every ethnic group has differences, everyone brings something different to the table, and this diversity should be celebrated, not denied. So why has acknowledging these cultural differences become so taboo?

In The Coloring Book, Colin, a native New Yorker, tackles this issue head-on while taking us on a trip through the insane melting pot of 1970s Brooklyn, the many, many dive bars of 1980s Manhattan, the comedy scene of the 1990s, and post-9/11 America. He mixes his incredibly candid and hilarious personal experiences with no-holds-barred observations to definitively decide, at least in his own mind, which stereotypes are funny, which stereotypes are based on truths, which have become totally distorted over time, and which are actually offensive to each group, and why.

As it pokes holes in the tapestry of fear that has overtaken discussions about race, The Coloring Book serves as an antidote to our paralysis when it comes to laughing at ourselves . . . and others.

Colin Quinn is a stand-up comedian and writer best known for his five years writing and performing (and anchoring "Weekend Update") on Saturday Night Live. He was also the sidekick/announcer of MTV's game show Remote Control and host of Tough Crowd with Colin Quinn on Comedy Central. He has performed on Broadway and toured the country for his one-man show Long Story Short, which was adapted into an Emmy-nominated HBO special.

"Colin Quinn has always been a great comedian and a great actor, and now you have to call him a great author, as well. This book is like Roots with way more jokes. Once you read THE COLORING BOOK you'll realize that Colin Quinn is the white Richard Pryor."
-Chris Rock

"Any good comedian needs two things: an X-ray machine and a scalpel. The X-ray to find where the problem is, and the scalpel to start slicing it up. In the multiple decades Colin and I have been the closest of friends, he has always had two of the finest of these essential comedy tools I've ever seen. In this amazing new book, you get a side of his humor and perspective that has never been on display quite like this. It's gorgeous, it's hilarious, it's brilliant. You're lucky to get this. Not as lucky as I am, but very, very goddamn lucky. Just run home with it, shut up and be glad."
-Jerry Seinfeld