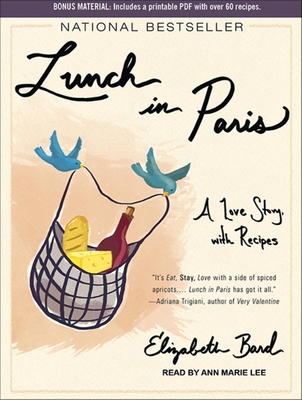 In Paris for a weekend visit, Elizabeth Bard sat down to lunch with a handsome Frenchman--and never went home again.Was it love at first sight? Or was it the way her knife slid effortlessly through her pav au poivre, the steak's pink juices puddling into the buttery pepper sauce? Lunch in Paris is a memoir about a young American woman caught up in two passionate love affairs--one with her new beau, Gwendal, the other with French cuisine. Packing her bags for a new life in the world's most romantic city, Elizabeth is plunged into a world of bustling open-air markets, hipster bistros, and size 2 femmes fatales. She learns to gut her first fish (with a little help from Jane Austen), soothes pangs of homesickness (with the rise of a chocolate souffl ), and develops a crush on her local butcher (who bears a striking resemblance to Matt Dillon). Elizabeth finds that the deeper she immerses herself in the world of French cuisine, the more Paris itself begins to translate. French culture, she discovers, is not unlike a well-ripened cheese: there may be a crusty exterior, until you cut through to the melting, piquant heart.Peppered with mouth-watering recipes for summer ratatouille, swordfish tartare, and molten chocolate cakes, Lunch in Paris is a story of falling in love, redefining success, and discovering what it truly means to be at home. In the delicious tradition of memoirs like A Year in Provence and Under the Tuscan Sun, this book is the perfect treat for anyone who has dreamed that lunch in Paris could change their life.

Elizabeth Bard is a journalist and author of the acclaimed "Lunch in Paris: A Love Story with Recipes."

Ann Marie Lee has worked extensively as an actress in the theater, as well as in guest and recurring roles in television and film. She has recorded numerous audiobooks and has received several "AudioFile" Earphones Awards as well as a "Publishers Weekly" Listen-Up Award.