To Be Where You Are (Mitford Novel) 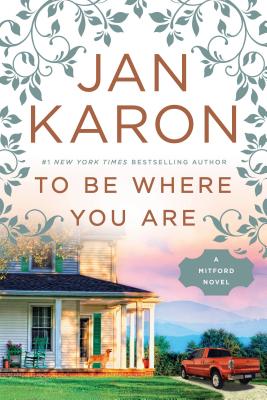 To Be Where You Are (Mitford Novel)

Millions of Karon fans will be thrilled that it's life as usual in the wildly popular Mitford series: A beloved town character lands a front-page obituary, but who was it, exactly, who died? And what about the former mayor, born the year Lindbergh landed in Paris, who's still running for office? All this, of course, is but a feather on the wind compared to Muse editor J.C. Hogan's desperate attempts to find a cure for his marital woes. Will it be high-def TV or his pork chop marinade?

In fiction, as in real life, there are no guarantees.

Twenty minutes from Mitford at Meadowgate Farm, newlyweds Dooley and Lace Kavanagh face a crisis that devastates their bank account and impacts their family vet practice.

But there is still a lot to celebrate, as their adopted son, Jack, looks forward to the most important day of his life--with great cooking, country music, and lots of people who love him. Happily, it will also be a day when the terrible wound in Dooley's biological family begins to heal because of a game--let's just call it a miracle--that breaks all the rules.

Jan Karon is the author of the bestselling series of fourteen Mitford novels featuring Episcopal priest Father Timothy Kavanagh and the fictional village of Mitford, the most recent of which, To Be Where You Are, hit #1 on the Wall Street Journal bestseller list and #2 on the New York Times bestseller list. She is also the author of twelve other books, including a cookbook and several books for children. Karon lives in Charlottesville, Virginia.