In Praise of Difficult Women: Life Lessons From 29 Heroines Who Dared to Break the Rules 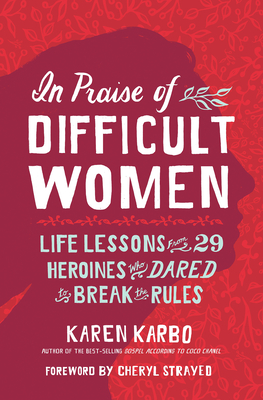 In Praise of Difficult Women: Life Lessons From 29 Heroines Who Dared to Break the Rules

By  Karen Karbo , Foreword by  Cheryl Strayed
Paperback
$ 16.99
Order Online (Out of Stock In Store)

KAREN KARBO is the author of multiple award-winning novels, memoirs and works of nonfiction. Her best-selling "Kick-Ass Women" series includes The Gospel According to Coco Chanel: Life Lessons from the World's Most Elegant Woman, which was an international bestseller. Karbo's short stories, essays, articles and reviews have appeared in Elle, Vogue, Esquire, Outside, the New York Times, Salon.com, and other publications. She is a recipient of a National Endowment for the Arts Fellowship in Fiction, and a winner of the General Electric Younger Writer Award. Karbo lives in Portland, Oregon, where she continues to kick ass.
CHERYL STRAYED (foreword) is the author of the #1 New York Times best-selling memoir Wild, the best-selling advice essay collection Tiny Beautiful Things, the novel Torch, and the collection of quotations Brave Enough. Wild was chosen by Oprah Winfrey as her first selection for Oprah's Book Club 2.0, and made into an Oscar-nominated movie. Strayed's essays have been published in The Best American Essays, the New York Times, the Washington Post Magazine, Vogue, Salon, The Sun, Tin House, and elsewhere. Strayed is the co-host, along with Steve Almond, of the WBUR podcast Dear Sugar Radio, which originated with her popular Dear Sugar advice column on The Rumpus. She lives in Portland, Oregon.