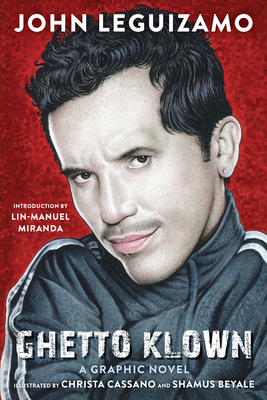 In this graphic-novel adaptation of his award-winning Broadway memoir, John Leguizamo lays bare his life story, sharing memories of his early years as an actor on stage, on television, and in major motion pictures opposite some of Hollywood’s biggest stars, such as Al Pacino, Patrick Swayze, and Steven Seagal, and working for directors Baz Luhrmann and Brian De Palma. Leguizamo opens up about his loves and marriages, while addressing self-doubt and melancholy in a way that enlightens and entertains. This revised and expanded paperback includes an all-new introduction by Lin-Manuel Miranda.

“Ghetto Klown is autobiographical dynamite—this is Leguizamo at his scathing, honest, moving, comedic best. Among the finest portraits of an artist as a young wounded talented man as I’ve read.”
—Junot Díaz

“My main Johnny Legs has done it again. Ghetto Klown as a graphic novel? DOPENESS.”
—Spike Lee
John Leguizamo’s 35-year career in show business has included turns in movies such as Carlito’s Way, Romeo + Juliet, Moulin Rouge!, and Chef, as well as six award-winning one-man Broadway shows. In 2018, he received a special Tony Award for Lifetime Achievement. He lives in New York City. Christa Cassano is a visual artist and storyteller based in Brooklyn. Shamus Beyale grew up in the Navajo Nation in New Mexico and is a Brooklyn-based cartoonist and illustrator.

Christa Cassano is a Brooklyn-based artist and member of Hang Dai Studios in Gowanus.