A Homemade Life: Stories and Recipes from My Kitchen Table 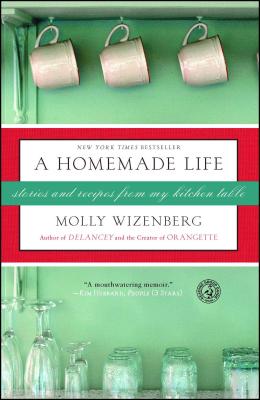 A Homemade Life: Stories and Recipes from My Kitchen Table

By  Molly Wizenberg
$ 18.00
Out of Stock In Store (Available to Order)

• An irresistible story of cooking that goes beyond the kitchen: Molly Wizenberg shares stories of an everyday life and a way of eating that is inspiring, playful, and mindful. From her father’s French toast to her husband Brandon’s pickles to her chocolate wedding cakes, A Homemade Life is a story about the lessons we can learn in the kitchen: who we are, who we love, and who we want to be..

• Delicious homemade food: The fifty recipes that accompany Molly’s writing are an integral part of her story; she connects food to the people who cook and eat it. Full of fresh flavors, these dishes invite novices and experienced cooks alike into the kitchen. .

• An established following: The hardcover of A Homemade Life reached the New York Times extended list, and Molly read before standing-room only crowds at bookstores across the country. Wizenberg’s blog, Orangette, was named the #1 food blog in the world by the London Times and boasts more than 9,500 hits per day. .

Molly Wizenberg, winner of the 2015 James Beard Foundation Award, is the voice behind Orangette, named the best food blog in the world by the London Times. Her first book, A Homemade Life: Stories and Recipes from My Kitchen Table, was a New York Times bestseller, and her work has appeared in Bon Appétit, The Washington Post, The Art of Eating, and The Guardian, and on Saveur.com and Gourmet.com. She also cohosts the hit podcast Spilled Milk. She lives in Seattle with her husband Brandon Pettit, their daughter June, and two dogs named Jack and Alice. She and Brandon own and run the restaurants Delancey and Essex.