Parallel Worlds: A Journey Through Creation, Higher Dimensions, and the Future of the Cosmos 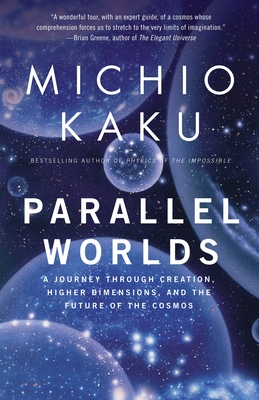 Parallel Worlds: A Journey Through Creation, Higher Dimensions, and the Future of the Cosmos

In this thrilling journey into the mysteries of our cosmos, bestselling author Michio Kaku takes us on a dizzying ride to explore black holes and time machines, multidimensional space and, most tantalizing of all, the possibility that parallel universes may lay alongside our own.

Kaku skillfully guides us through the latest innovations in string theory and its latest iteration, M-theory, which posits that our universe may be just one in an endless multiverse, a singular bubble floating in a sea of infinite bubble universes. If M-theory is proven correct, we may perhaps finally find answer to the question, “What happened before the big bang?” This is an exciting and unforgettable introduction into the new cutting-edge theories of physics and cosmology from one of the pre-eminent voices in the field.

Dr. Michio Kaku is professor of theoretical physics at the City University of New York and a co-founder of string field theory. He is the author of several widely acclaimed books, including Visions, Beyond Einstein, and Hyperspace, which was named one of the best science books of the year by the New York Times and the Washington Post. He hosts a nationally syndicated radio science program and has appeared on such national television shows as Nightline, 60 Minutes, Good Morning America, and Larry King Live.