The Genius of Language: Fifteen Writers Reflect on Their Mother Tongue 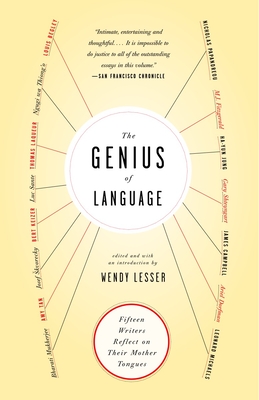 The Genius of Language: Fifteen Writers Reflect on Their Mother Tongue

Fifteen outstanding writers answered editor Wendy Lesser’s call for original essays on the subject of language–the one they grew up with, and the English in which they write.Despite American assumptions about polite Chinese discourse, Amy Tan believes that there was nothing discreet about the Chinese language with which she grew up. Leonard Michaels spoke only Yiddish until he was five, and still found its traces in his English language writing. Belgian-born Luc Sante loved his French Tintin and his Sartre, but only in English could he find “words of one syllable” that evoke American bars and bus stops. And although Louis Begley writes novels in English and addresses family members in Polish, he still speaks French with his wife–the language of their courtship. As intimate as one’s dreams, as private as a secret identity, these essays examine and reveal the writers’ pride, pain, and pleasure in learning a new tongue, revisiting an old one, and reconciling the joys and frustrations of each.

Wendy Lesser is the founding editor of The Threepenny Review and the author of four previous books. Her reviews and essays appear in major newspapers and magazines across the country. She has been awarded fellowships from the National Endowment for the Humanities and the Guggenheim Foundation, and in 1997 she received the Morton Dauwen Zaub Award from the Academy of Arts and Letters. She lives in Berkeley, California, with her husband and son.