An Ambulance Is on the Way: Stories of Men in Trouble (Paperback) 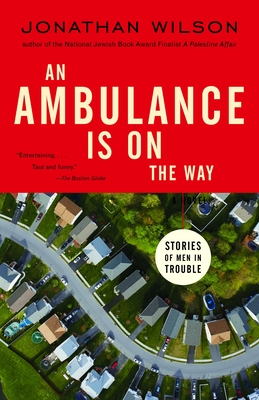 By Jonathan Wilson
Not Available
Special Order (unlikely to be available)

From the slacker husband who spends his day running household errands, chatting up the local soccer moms, and drinking most of the wine he was instructed to buy for his wife’s women’s-group meeting, to the man who calls an old girlfriend while waiting for the verdict from his cardiologist, to the good Jewish son who is torn between the caustic wit of his very Jewish mother and the fertility urges of his very not-Jewish girlfriend, each of these stories is touched by Wilson’s affection for male foibles. Taken together, they give us a nuanced picture of men in hot water–with women, their teenage kids, and their own consciences.

Jonathan Wilson is the author of the novels A Palestine Affair, a 2004 finalist for the National Jewish Book Award, and The Hiding Room, and of Schoom, a collection of stories. His work has appeared in The New Yorker, The New York Times Magazine, The Best American Short Stories, and Ploughshares, among other publications, and he has received a Guggenheim Fellowship. He teaches English at Tufts University and lives in Newton, Massachusetts, with his wife and two sons.

“How does Jonathan Wilson do it? . . . The way Denis Johnson did it, the way Jayne Anne Phillips did it (but funnier), the way David Foster Wallace did it (but deeper).” –Los Angeles Times

“Tantalizing . . . his writing engages on every page with disarming intelligence and imagination.” –Elle

“Sublime. . . . It might be considered a companion volume to the movie Sideways.” –Seattle Weekly