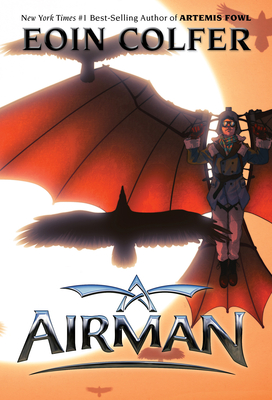 By  Eoin Colfer
Paperback
$ 8.99
On Our Shelves Now

Zorro meets The Count of Monte Cristo in this dazzling, action-packed classic from the author of the Artemis Fowl series, now with a snazzy new look for this paperback reissue.
Conor Broekhart was born to fly.
It is the 1890s, and Conor and his family live on the sovereign Saltee Islands, off the Irish coast. Conor spends his days studying the science of flight with his tutor and exploring the castle with the king’s daughter, Princess Isabella.
But the boy’s idyllic life changes forever the day he discovers a deadly conspiracy against the king. When Conor intervenes, he is branded a traitor and thrown into jail on the prison island of Little Saltee. There, he has to fight for his life, as he and the other prisoners are forced to mine for diamonds in inhumane conditions.

There is only one way to escape Little Saltee, and that is to fly. So Conor passes the solitary months by scratching drawings of flying machines into the prison walls. The months turn into years, but eventually the day comes when Conor must find the courage to trust his revolutionary designs and take to the skies.

Eoin Colfer is the author of the New York Times best-selling Artemis Fowl series, the first of which was adapted into a major motion picture from the Walt Disney Studios. He also wrote a spin-off series, The Fowl Twins, as well as many other titles for young readers and adults, including Highfire, Iron Man: The Gauntlet, Airman, Half Moon Investigations, Eoin Colfer's Legend of . . . books, The Wish List, Benny and Omar; and Benny and Babe. In 2014, he was named Ireland's laureate for children's literature. He lives with his wife and two sons in Dublin, Ireland. To learn more, visit www.eoincolfer.com. He is also on Twitter and Instagram @EoinColfer.