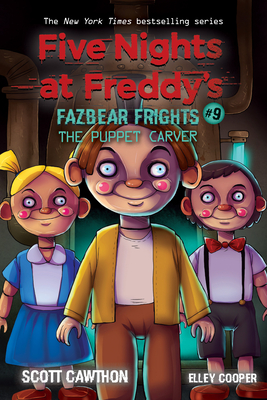 By  Scott Cawthon , Elley Cooper
Paperback
$ 9.99
Out of Stock In Store (Available to Order)

Five Nights at Freddy's fans won't want to miss this pulse-pounding collection of three novella-length tales that will keep even the bravest FNAF player up at night...

Consumed by failure... Desperate to keep his kiddie pizzeria from bankruptcy, Jack lets his animatronics tech pitch him a new invention that might just give him some perspective. Frustrated by an unfair arcade game, Colton throws himself into re-engineering the device at any cost. Marley's best friend goes missing on a tour of the Freddy's Pizza Factory; she knows what really happened... but her guilt isn't the only thing threatening to eat her alive.

Readers beware: This collection of terrifying tales is enough to unsettle even the most hardened Five Nights at Freddy's fans.

Elley Cooper writes fiction for young adults and adults. She has always loved horror and is grateful whenever she can spend time in a dark and twisted universe. Elley lives in Tennessee with her family and many spoiled pets and can often be found writing books with Kevin Anderson & Associates.
Scott Cawthon is the author of the bestselling video game series Five Nights at Freddy's, and while he is a game designer by trade, he is first and foremost a storyteller at heart. He is a graduate of The Art Institute of Houston and lives in Texas with his family.