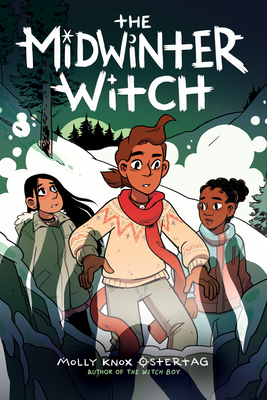 By  Molly Knox Ostertag
Hardcover
$ 24.99
Order Online (Out of Stock In Store)
The acclaimed graphic novel world of The Witch Boy and The Hidden Witch comes to a thrilling conclusion in this story of friendship, family, and finding your true power.
Magic has a dark side . . .

Aster always looks forward to the Midwinter Festival, a reunion of the entire Vanissen family that includes competitions in witchery and shapeshifting. This year, he's especially excited to compete in the annual Jolrun tournament-as a witch. He's determined to show everyone that he's proud of who he is and what he's learned, but he knows it won't be easy to defy tradition.

Ariel has darker things on her mind than the Festival-like the mysterious witch who's been visiting her dreams, claiming to know the truth about Ariel's past. She appreciates everything the Vanissens have done for her. But Ariel still craves a place where she truly belongs.

The Festival is a whirlwind of excitement and activity, but for Aster and Ariel, nothing goes according to plan. When a powerful and sinister force invades the reunion, threatening to destroy everything the young witches have fought for, can they find the courage to fight it together? Or will dark magic tear them apart?
Molly Knox Ostertag is the author and illustrator of the acclaimed graphic novels The Witch Boy and The Hidden Witch and the illustrator of several projects for older readers, including the webcomic Strong Female Protagonist and Shattered Warrior by Sharon Shinn. She grew up in the forests of upstate New York and graduated in 2014 from the School of Visual Arts, where she studied cartooning and illustration. She currently lives in Los Angeles with her girlfriend and several pets. Visit her online at mollyostertag.com.