It's Not Yet Dark: A Memoir 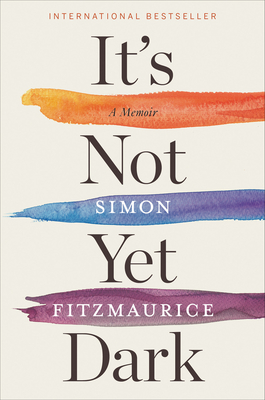 It's Not Yet Dark: A Memoir

“A fiercely eloquent testament to making the most out of every moment we're given.”
—People, Book of the Week

A luminous memoir in the tradition of The Diving Bell and the Butterfly and a #1 bestseller upon its initial release in Ireland, a young filmmaker gives us “a story of courage, of heart, of coming back for more, of love and struggle and the power of both” (Joseph O'Connor).

In 2008, Simon Fitzmaurice was diagnosed with ALS, or Lou Gehrig’s disease. He was given four years to live. In 2010, in a state of lung-function collapse, Simon knew with crystal clarity that now was not his time to die. Against all prevailing medical opinion, he chose to ventilate in order to stay alive.

In It’s Not Yet Dark, the young filmmaker, a husband and father of five small children, draws us deeply into his inner world. Told in simply expressed and beautifully stark prose, it is an astonishing journey into a life that, though brutally compromised, is lived more fully than most, revealing at its core the potent power love has to carry us through the days.

Written using an eye-gaze computer, It's Not Yet Dark is an unforgettable book about relationships and family, about what connects and separates us as people, and, ultimately, about what it means to be alive.

SIMON FITZMAURICE was an award-winning writer and film director. His debut memoir, It’s Not Yet Dark, was a #1 bestseller upon its release Ireland, has been nominated for the Bord Gáis Book of the Year Award, and was ranked #2 in Liveline’s Writer’s Book of the Year. His films have screened at film festivals all over the world and won prizes at home and abroad, including Best Short Film at the Cork Film Festival and the Belfast Film Festival (twice); the Grand Jury Prize at the Opalcine Film Festival, Paris; the Jimmy Stewart Memorial Award at the Heartland Film Festival; and Jury Award at the Palm Springs International Film Festival. His short film The Sound of People was selected to screen at the prestigious Sundance Film Festival. Simon held honors master’s degrees in both Anglo-Irish literature and drama, and film theory and production. His short fiction has been short-listed for the Hennessy Literary Award, and his poetry has appeared in the quarterly publication West 47. His first feature film, My Name Is Emily, was just released in both the UK and the United States. He died in October 2017. He is survived by his wife, Ruth; their five children, Jack, Raife, Arden, Sadie, and Hunter; and their basset hound, Pappy.