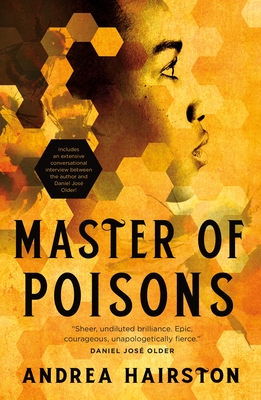 By  Andrea Hairston
Paperback
$ 19.99
On Our Shelves Now

“This is a prayer hymn, a battle cry, a love song, a legendary call and response bonfire talisman tale. This is medicine for a broken world." —Daniel José Older

NEW MATERIAL FOR A NEW EDITION!
This trade paperback includes an extensive, conversational interview between the author and Daniel José Older!

The world is changing. Poison desert eats good farmland. Once-sweet water turns foul. The wind blows sand and sadness across the Empire. To get caught in a storm is death. To live and do nothing is death. There is magic in the world, but good conjure is hard to find.

Djola, righthand man and spymaster of the lord of the Arkhysian Empire, is desperately trying to save his adopted homeland, even in exile.

Awa, a young woman training to be a powerful griot, tests the limits of her knowledge and comes into her own in a world of sorcery, floating cities, kindly beasts, and uncertain men.

Awash in the rhythms of folklore and storytelling and rich with Hairston's characteristic lush prose, Master of Poisons is epic fantasy that will bleed your mind with its turns of phrase and leave you aching for the world it burns into being.

Andrea Hairston is a novelist, essayist, playwright, and the Artistic Director of Chrysalis Theatre. She is the author of Redwood and Wildfire, winner of the 2011 Otherwise Award and the Carl Brandon Kindred Award, and Mindscape, shortlisted for the Phillip K Dick and Otherwise Awards, and winner of the Carl Brandon Parallax Award. In her spare time, she is the Louise Wolff Kahn 1931 Professor of Theatre and Afro-American Studies at Smith College. She has received the International Association of the Fantastic in the Arts Distinguished Scholarship Award for outstanding contributions to the criticism of the fantastic. She bikes at night year-round, meeting bears, and the occasional shooting star.