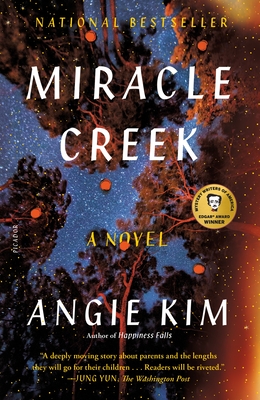 By  Angie Kim
Paperback
$ 17.00
Out of Stock In Store (Available to Order)

WINNER OF THE EDGAR AWARD FOR BEST FIRST NOVEL

The “gripping… page-turner” (Time) hitting all the best of summer reading lists, Miracle Creek is perfect for book clubs and fans of Liane Moriarty and Celeste Ng

How far will you go to protect your family? Will you keep their secrets? Ignore their lies?

In a small town in Virginia, a group of people know each other because they’re part of a special treatment center, a hyperbaric chamber that may cure a range of conditions from infertility to autism. But then the chamber explodes, two people die, and it’s clear the explosion wasn’t an accident.

A powerful showdown unfolds as the story moves across characters who are all maybe keeping secrets, hiding betrayals. Chapter by chapter, we shift alliances and gather evidence: Was it the careless mother of a patient? Was it the owners, hoping to cash in on a big insurance payment and send their daughter to college? Could it have been a protester, trying to prove the treatment isn’t safe?

“A stunning debut about parents, children and the unwavering hope of a better life, even when all hope seems lost" (Washington Post), Miracle Creek uncovers the worst prejudice and best intentions, tense rivalries and the challenges of parenting a child with special needs. It’s “a quick-paced murder mystery that plumbs the power and perils of community” (O Magazine) as it carefully pieces together the tense atmosphere of a courtroom drama and the complexities of life as an immigrant family. Drawing on the author’s own experiences as a Korean-American, former trial lawyer, and mother of a “miracle submarine” patient, this is a novel steeped in suspense and igniting discussion.

Angie Kim moved as a preteen from Seoul, South Korea to the suburbs of Baltimore. She attended Stanford University and Harvard Law School, where she was an editor of the Harvard Law Review, then practiced as a trial lawyer at Williams & Connolly. Her stories have won the Glamour Essay Contest and the Wabash Prize for Fiction, and appeared in numerous publications including The New York Times, Salon, Slate, The Southern Review, Sycamore Review, Asian American Literary Review, and PANK. Kim lives in Northern Virginia with her husband and three sons.