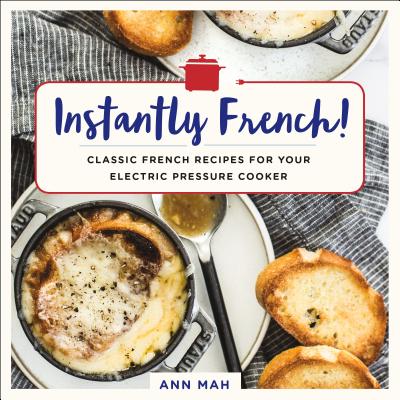 Author of Mastering the Art of French Eating, Ann Mah is undoubtedly an expert on all things relating to French food. But when she discovered the electric pressure cooker, she realized that it was the secret weapon the French have used for years to speedily prepare the complex dishes of la cuisine de grandmère. In her first cookbook, Ann celebrates everything gastronomically French that an electric pressure cooker can do with over seventy different recipes that cut cooking times in more than half.

The delights of Instantly French! range from appetizers like eggplant caviar, pâté de campagne, and savory mini blue cheese cakes to soups like traditional French onion or an autumnal purée of butternut squash and chestnut. For main courses, there are classics like boeuf bourguignon, cassoulet, chicken tagine with preserved lemons, and blanquette de veau. Desserts feature poached pears, flourless chocolate cake, and crème brulée. And, all of these dishes can be made in a fraction of the time they usually take. Illustrated throughout with full color photos, Instantly French! is the essential guide to fast, delicious French cooking with your electric pressure cooker.

Ann Mah is a food and travel writer and the author of several books, including Mastering the Art of French Eating, and The Lost Vintage. She contributes regularly to the New York Times Travel section, and her work has also appeared in Condé Nast Traveler, The Best American Travel Writing 2017, Vogue.com, Washingtonian Magazine, and other publications. Ann currently lives in Paris and Washington, D.C.