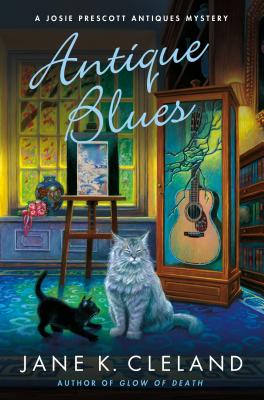 When amateur sleuth and antiques expert Josie Prescott is called in to appraise a Japanese woodblock print and vintage guitar for her friend Mo, she’s thrilled—until Mo is murdered.

It doesn’t take her long to pinpoint one suspect: Mo’s sister’s manipulative boyfriend, who sold her the print—and has now, conveniently, disappeared. Josie’s antiques know-how and detective skills soon lead her down an increasingly perplexing trail, scattered with gamblers, extramarital affairs, and under-the-table purchases.

Readers will relish a return to Rocky Point with Josie as she works together with her friends—the ambitious young reporter Wes Smith, and Rocky Point’s savvy police chief, Ellis Hunter—to sift through the conflicting stories around them and find Mo’s killer.

JANE K. CLELAND once owned a New Hampshire-based antiques and rare books business. She is the author of nearly twenty novels and short stories in the beloved Josie Prescott Antiques mystery series, is the winner of two David Awards for Best Novel, and has been a finalist for the Agatha, Macavity, and Anthony Awards. Jane is the former president of the New York chapter of the Mystery Writers of America and chairs the Wolfe Pack’s Black Orchid Novella Award in partnership with Alfred Hitchcock Mystery Magazine. She won the Agatha Award for both of her books on the craft of writing, Mastering Suspense, Structure and Plot and Mastering Plot Twists. She is part of the fulltime English faculty at Lehman College, a contributing editor for Writer’s Digest magazine, and lives in New York City.