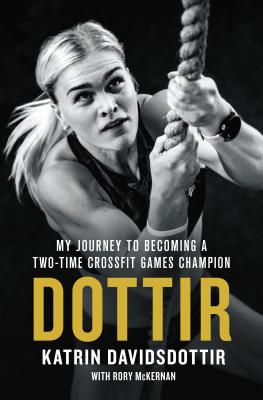 By Katrin Davidsdottir, Rory McKernan
$29.99
Out of Stock - Click to Order

This is a memoir by two-time CrossFit Games champion, Katrin Davidsdottir.

Dottir is two-time consecutive CrossFit Games Champion Katrin Davidsdottir's inspiring and poignant memoir. As one of only three women in history to have won the title of “Fittest Woman on Earth” twice, Davidsdottir knows all about the importance of mental and physical strength. She won the title in 2015, backing it up with a second win in 2016, after starting CrossFit in just 2011.

A gymnast as a youth, Davidsdottir wanted to try new challenges and found a love of CrossFit. But it hasn't been a smooth rise to the top. In 2014, just one year before taking home the gold, she didn't qualify for the Games. She used that loss as motivation and fuel for training harder and smarter for the 2015 Games. She pushed herself and refocused her mental game. Her hard work and perseverance paid off with her return to the Games and subsequent victories in 2015 and 2016.

In Dottir, Davidsdottir shares her journey with readers. She details her focus on training, goal setting, nutrition, and mental toughness.

KATRIN DAVIDSDOTTIR is the consecutive two-time champion of the CrossFit Games' "The Fittest Woman on Earth" title. A former gymnast from Reykjavik, Iceland, she is the third person to ever win the Games twice, and only the second woman to do so. She is currently training for next year's Games in Natick, Massachusetts.

"I met Katrin during her first week of attending CrossFit classes, shortly after my first CrossFit Games championship...Her story is a reminder to fans and aspiring athletes that anyone can achieve greatness if they are willing to work hard enough. It’s also a testament to the power of Iceland’s Dottirs that makes my heart swell with pride." —Annie Thorisdottir, Two-Time CrossFit Games Champion

"Katrin Davidsdottir is a fierce competitor with a great story. In the season leading up to my first CrossFit Games championship she was my primary training partner, and she pushed me to new levels of performance. That year I trained by myself mostly, but I would picture her there next to me and think, she wouldn’t be putting the bar down… she would be taking shorter breaks. But Kat wasn’t always fierce. She was forced to overcome huge setbacks. Instead of running from failure or accepting mediocrity, Katrin learned from her mistakes and worked even harder, both inside the gym on her fitness and outside of the gym on her mindset. Katrin became a champion by choice, and her story highlights what I believe above all things. That there is no magic pill. There are no superior genetics. There are no shortcuts. There is only hard work. And hard work pays off." —Mat Fraser, three time defending Fittest Man on Earth

"Hundreds of books claim to possess the secret ingredients of becoming a champion. In this book, Katrin Davidsdottir gives you her actual recipe from being one! Through a candid look at her personal and professional life, Katrin shares the struggles and triumphs that helped to build her successful career, which includes two gold medals at the CrossFit Games. From childhood gymnastics to the CrossFit Games podium, Katrin provides tangible and relatable stories about reframing failure, striving for greatness, evolving your mindset and chasing your dreams. Dottir serves as a reminder that there is a 'best version' of all of us, and every day provides an opportunity to get one step closer to yours, if you’re willing to work hard." —Lewis Howes, New York Times bestselling author of The School of Greatness

"A native of Reykjavík, Iceland, Davidsdottir chronicles her passion for physical challenges dating back to her
early years: 'I came out of the womb hypercompetitive.' She describes her experience as a competitive gymnast and two-time CrossFit Games Champion (2015, 2016), earning the title Fittest Woman on Earth.
Davidsdottir, with the unwavering support of her family, especially her beloved grandparents, and a tight
community of fellow competitors, was able to overcome self-doubt and experience mental and physical
growth with each competition." —Booklist

"Through brutal dawn-to-dusk sessions with her coach, Davidsdottir—writing in prose as efficient as her workouts—cleans up “the space between my ears” and finds her ferocity, snatching the Fittest Woman title in 2015 and 2016. This is an inspiring narrative for girls, women, CrossFitters, and anyone searching for physical or mental toughness." —Publishers Weekly

“As raw a picture into a Games champion's life as anything we've seen before.” —Morning Chalk Up

"At what was billed as the 'toughest' CrossFit Games in history, Iceland's newest CrossFit queen once again out-pushed, out-pulled, out-ran, and basically out-worked one of the most competitive fields in history to win the 2016 CrossFit Games."—MensFitness.com